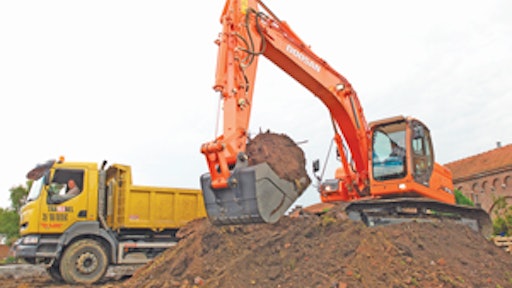 Their electronic package allows communication between the engine and hydraulics for optimum performance and fuel economy. Other features include a boom overload warning device, CD player, travel and swing alarm and auxiliary valve with one- and two-way hydraulic piping to the end of the arm with flow control inside the cab.

DX Series excavators
The DX180, DX225 and DX255 crawler excavators and DX140W, DX190W and DX210W wheeled excavators are designed for strength and durability. In addition to their emissions-compliant engines, the units feature a dual-walled exhaust silencer to reduce noise levels. Other features include convenient hose routing, wiring harness layout and filter placement, as well as centralized grease points on the boom and arm.

The cab design includes a tilting and telescoping steering column, adjustable arm rest for the joystick and adjustable suspension seat with lumbar support. The seat is 15% larger than its Mega series predecessor.