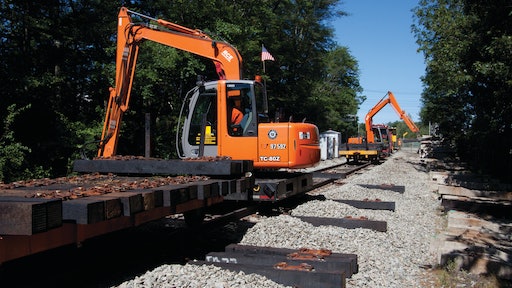 Hitachi ZX80 excavators with special attachments were mounted to high-rail bases in order to remove the old ties during rebuilding of Boston's commuter rail.

Rebuilding a 56-mile commuter railway in metropolitan Boston which included removing 160,000 concrete ties and installing 187,000 new wooden ties while still keeping the tracks in service for morning and afternoon trains.

J. F. White Contracting Company, one of Massachusetts’ largest heavy/civil contractors rebuilt a 56-mile commuter railway in metropolitan Boston nearly a year ahead of schedule and under budget, thanks to the company’s unique use of three “trains” of multiple excavators mounted on railroad bodies, outfitted with complex and semi-automated hydraulic attachments.

“In preparing our bid to win the contract we felt an aggressive plan incorporating the newest technology, new or nearly new equipment, and a proven work force would not only win us the contract but allow us to confidently shoot for earning the bonus of an early completion," says Nick Bruno, J.F. White’s project superintendent.

The specialized equipment has been sourced from several places. One is Rail Construction Equipment (RCE), a Chicago-based manufacturer of specialized attachments designed for Hitachi excavators and Deere wheel loaders and motor graders. Another is Taibbi Equipment Corporation, a local minority-owned equipment-leasing company. Not only did they rent out new Hitachi ZX80 Excavators with special attachments already mounted to high-rail bases but they provided skilled operators as well. J.F. White found this combo package especially attractive. And Schmidt Equipment, the Massachusetts Hitachi/John Deere dealer, has also provided equipment and technical expertise. Overall, although some equipment pieces were bought, most have been rented.

The project called for the removal of 160,000 concrete ties that had prematurely failed and the installation of 187,000 new wooden ties in their place.

Work began at 9:00 a.m. weekdays, after the last morning-rush commuter train had run and rail service suspended. By 3:30 p.m., the track had to be completely restored to service so the afternoon rush trains couldn run. During those six-and-a-half hours, buses, arranged for by J.F. White, took commuters from station to station.

In addition, 56 railroad grade crossings are being rebuilt. This is done on the weekends when the tracks and roads can be completely shut down.

Besides the ZX80s, a ZX190W-3 - customized with a high-rail base and grapple - loaded up the old concrete ties for trips to a recycling crusher.

Thanks to the nonstop reliability of the Hitachi equipment plus the tight management and oversight of J.F. White, the project was scheduled to be completed in under half the time budgeted by the railway’s owner, the Massachusetts Bay Transportation Authority.

We understand the challenges of your jobsite. Our ADTs are designed with you in mind.
October 23, 2020
Latest
Excavators

While at CONEXPO, Doosan launched the new DA 45 articulated dump truck and the DX 800LC excavator, which will be released later in 2020.
Doosan Infracore North America LLC
March 18, 2020
Follow Us