Excavator Clamps Down on Productivity 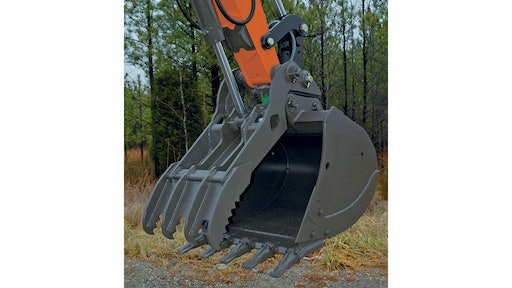 The combination of the excavator with its pin-on clamp has improved the crew’s productivity and profitability compared to previous equipment solutions.

Burr Oak Tool, a customer for nearly three decades, came to James Ware Construction for a 120,000-sq.-ft. expansion to a state-of-the-art building that the contractor had originally built at Dresser Industrial Park in Sturgis, MI. A full-service design/build general contractor and qualified builder of Butler pre-engineered building systems, James Ware Construction sought to improve productivity on the expansion by using its first Doosan machine, a DX225LC-3 crawler excavator configured with a clamp attachment.

According to owner James Ware, the excavator with a 48-in. bucket is being used to perform general excavation duties, including trenching foundation footings and utilities, and loading topsoil, gravel and refuse into dump trucks. Ware also put the 167-hp excavator to the test digging a 10,000-sq.-ft. drainage pond and breaking up frozen fill during a construction schedule that ran through the winter. The machine’s hydraulic system and strong breakout forces — topping 33,500 ft.-lbs. — provided the muscle to help remove approximately 2,000 yds. of topsoil, as well as level and grade 1,000 yds. of gravel.

The bucket’s abrasion-resistant (AR) steel construction had the added durability to excavate and backfill 1,200 linear feet of footing at a depth of 42 in., as well as trench more than 1,000 ft. to install 36-in. drain pipe backfilled with stone.

Ware says the excavator and its pin-on clamp has improved his crew’s productivity and profitability compared to its previous equipment solutions. “The Doosan excavator replaced another excavator with a stationary clamp. With its increased size, we can dig and load faster,” says Ware, “and we can use the clamp later this year for a demolition project.”

Ware’s success with the excavator’s clamp has him planning ahead to the productivity advantages he can gain with future Doosan attachments. “The DX225LC-3 is plumbed for a hydraulic breaker that we’ll rent as needed,” he says.