More than two-thirds of workers at the Spartanburg County, SC production facility will face layoffs as of May 1 as Kobelco halts production while awaiting its engine supplier’s emissions certification. 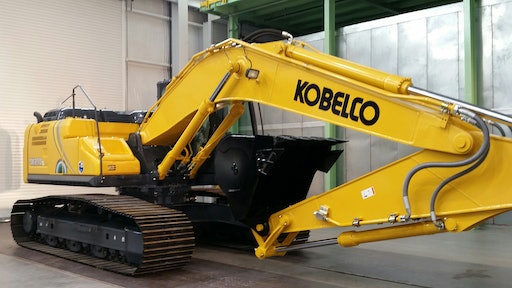 Shown is the first unit to roll off the production floor at the Spartanburg excavator manufacturing facility in 2016.

Kobelco Construction Machinery Co. Ltd.’s (KCM) decision in mid-February to temporarily suspend production of hydraulic excavators in North America effective May 1 will impact at least 100 employees at the Kobelco Construction Machinery U.S.A. Inc. (KCMU) production facility in Spartanburg County, SC. The company announced it would temporarily halt production at the plant in Moore, SC, due to a delay in the acquisition of 2021 EPA emissions certification by its engine supplier, Hino Motors, Ltd.

According to Channel 7 News (WSPA.com), KCMU has been a presence in Spartanburg County for five years and had seen its sales skyrocket during that time; it produced 600 models of excavators in 2020. The facility has approximately 160 employees, and more than two-thirds will face layoffs if the EPA approval isn’t forthcoming in the near future.

On February 17, KCM announced the suspension of production of excavators for North America after it was informed by its engine supplier, Hino Motors, Ltd. of a delay in EPA emissions certification for its 2021 model year J05E, J08E, P11C and E13C engines, “with no clear outlook on future supply schedule.” Following notification of the delay, KCM judged that production of hydraulic excavators equipped with the relevant engines would be difficult, and chose to temporarily halt production at the Spartanburg plant.

Production at in Spartanburg will remain halted until the supply of engines is resumed at an undetermined date. KCM plans to continue sales of models not impacted by the suspension, including various mini-excavators, 7- to 13-ton class excavators and the CK3300G crawler crane, as well as aftersales service for machines already delivered. In addition, the company is considering installation of an alternative engine during the supply disruption.

The Spartanburg County Council plans to host job fairs for employees affected by the production shutdown as needed.

Engine supplier Hino Motors is facing a slew of challenges as a result of the delay in EPA certification for new engine models. Hino, the heavy truck manufacturing division of Toyota Motor Co., also announced a “formal pause” in North American truck production at a December 23, 2020, meeting of its board of directors, citing “challenges” in the required U.S. engine certification testing process for new model year A09C, J08E and J05E diesel engines for North American truck models. Production is expected to be suspended through October 2021.

With Cat® Dozers, you’re ready to push ahead of the competition—and keep more money in your pocket.
Jun 1st, 2021
Latest

With Cat® Dozers, you’re ready to push ahead of the competition—and keep more money in your pocket.
Jun 1st, 2021

Design increases fuel efficiency and lowers maintenance costs up to 20% and improves performance up to 45%.
Caterpillar - Cat
Feb 10th, 2021

Brad Humphrey and the team discuss all things related to the jobsite and running a successful business. Tune in for a new episode every other Wednesday.
Jun 1st, 2021

Proterra will provide its battery technology for use in a proof-of-concept battery-electric hydraulic excavator Komatsu plans to bring to market by 2023.
Sara Jensen
Jan 27th, 2021

HM-Entreprenor, which currently operates nine R 926s and three R 945s, will replace machines with Liebherr products for the quality and performance of the equipment. Joining its fleet will be two new R 914 Compacts in early 2021.
Liebherr USA, Co.
Jan 7th, 2021

The 317 features multiple standard Cat technologies to boost operating efficiencies by up to 45%, while the 317 GC lowers maintenance costs by up to 20%.
Caterpillar - Cat
Dec 3rd, 2020
Follow Us