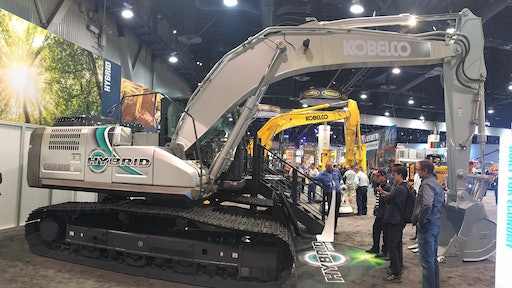 Kobelco produced its first hybrid excavator model in Japan in 2006, and at CONEXPO-CON/AGG 2017 chose to unveil a larger, more advanced version to the North American market. The 51,400-lb. 210HLC-10 Hybrid features a 160-hp Hino four-cylinder diesel engine operating at lower rpms and lithium-ion battery power, a combination that substantially reduces noise levels and increases fuel efficiency by 17% compared to the conventional model. The lithium-ion batteries are charged by the onboard generator, mounted behind the hydraulic pump, and energy recovered from the excavator swing motor as it turns and is released. Both the generator and batteries are liquid cooled to aid performance. The Hybrid provides comparable functionality as a conventional machine, with a 35,300-lbf. bucket digging force, 22-ft. maximum dig depth, 51,600-lb. drawbar pull force and a swing speed of 12.7 rpms. Details on availability have not yet been released.

Voters in Discovery’s Give Big Giveaway determined the amounts Building Homes for Heroes and Habitat for Humanity each receive from the Gold Rush excavator auction
Volvo Construction Equipment
June 2, 2020
Follow Us