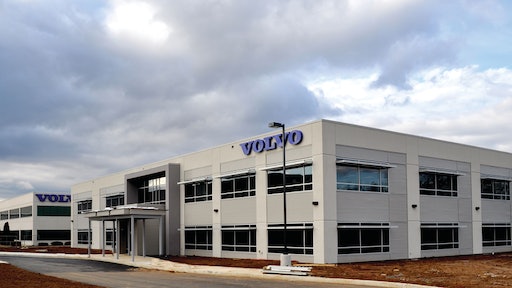 Volvo Construction Equipment cut the ribbon on its $100 million expansion program at its Shippensburg, PA, facility.

On March 21, 2013, Volvo Construction Equipment (Volvo CE) cut the ribbon on its $100 million expansion program at its Shippensburg, PA, facility. In addition to the official opening of a new headquarters building for the company's Americas operations, the event also marked the start of wheel loader production in Shippensburg.

Video: Volvo Aims to Build in America 70% of What it Sells Here

Joining Volvo CE President Pat Olney in the inauguration ceremony were U.S. Federal Highway Administrator Victor Mendez, Pennsylvania Department of Community and Economic Development Secretary Alan Walker and Swedish Ambassador to the U.S. Jonas Hafström, along with 1,000 employees and many other distinguished guests.

The investment affirms the Volvo CE’s long-term confidence in the North American market and consolidates its North American operations onto one site. The opening of the new building also marks the successful relocation of the sales office from Asheville, NC, to Shippensburg, PA.

“This should serve as a very clear signal that Volvo CE is committed to this market and in a better position than ever before to offer our customers products that are made by Americans, for Americans,” said Olney. “Longer term, building machines closer to our customers will have a positive impact for U.S.-based suppliers, who will gain more business; for customers, who will enjoy shorter lead times; and for Volvo CE, which will be less exposed to currency swings.”

Wheel loader production will initially start for the L60 to L90 range of loaders. “These machines are in high demand in North America. It’s easier to start up production of smaller machines and work our way up,” says Sean Glennon, vice president of operations at the Shippensburg facility. “The investment we make in these smaller models will allow us to eventually launch into the bigger machines and meet a wider scope of customer needs.”

Localized production will also help the company become more flexible and responsive to its customers in the region.

In addition to wheel loaders, the Shippensburg assembly hall produces motor graders and soil rollers. It is one of only a handful of LEED-Silver certified manufacting facilities in the world.

As part of the same investment, Volvo CE will also open a world-class customer center in the area in the first quarter of 2014.

The Shippensburg facility has been committed to producing construction equipment for nearly 40 years. Volvo CE acquired the business from Ingersoll Rand in April 2007. A $30 million, 200,000 square foot expansion was completed in June 2010 and included a new assembly hall and materials building. The office expansion, which opened in March, adds an additional 36,000 square feet and two smaller production buildings, which open in April this year, will provide a further 37,000 square feet, bringing the total size of the expanded facility to 650,000 square feet.

Today, the site employs more than 1,000 employees from nearly 20 countries, together working in operations, technology, sales & marketing, and customer support.

Volvo Invests in Its Shippensburg Facility