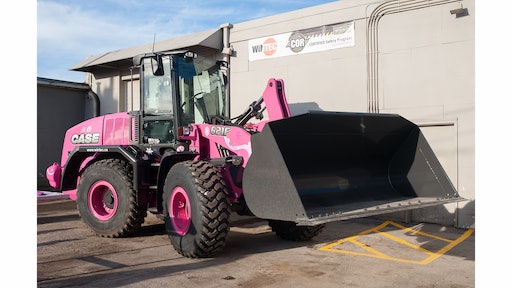 Profits generated from the custom-ordered Case 621F wheel loader will be contributed to the Canadian Breast Cancer Foundation – Prairies/NWT region.

Wintec Building Services of Winnipeg, Manitoba, recently purchased a pink Case 621F wheel loader. The first of its kind to be produced by Case Construction Equipment’s Fargo, ND, plant, the loader will primarily be used to help with the snow removal of the city’s roads. Ten percent of the profits generated from the custom-ordered loader will be contributed to the Canadian Breast Cancer Foundation – Prairies/NWT region. The website where people can make a donation, www.wintec.ca, will also be displayed on the machine.

The idea for the loader started when Doug Huselak, general manager of Wintec, lost his aunt to breast cancer. He decided to approach the Foundation about participating in a larger than usual donation.

“Wintec is committed to giving back to our community, while at the same time raising awareness for breast cancer. By donating 10% of the proceeds generated by our pink loader, we are hopeful we can make a difference in fighting this disease that affects so many,” Huselak says. “The ‘big pink’ loader is a recognizable figure and should heighten the awareness of the cause.”

Huselak and the Canadian Breast Cancer Foundation worked together to come up with the idea for the bright pink loader.

“Wintec approached us with this great idea back in August. It was tough to think about the upcoming winter and all the snow, but this pink loader will definitely brighten up our winter,” said Monique Levesque-Pharoah, senior development officer of funds development, Canadian Breast Cancer Foundation, Prairies/NWT region.

In order to move forward with its plan, Wintec worked with its local dealer, Hitrac. Paul Scharf, president of Hitrac, thought it was a great idea and helped get the process moving with the manufacturer.

“It really brings the cause to the construction industry,” says Scharf. “I’m glad to see the exposure coming. It’s pink. You’re not going to miss this on a city street.”

Along with the bright pink paint job, the loader is also covered in decals from the Canadian Breast Cancer Foundation.

The partnership between the foundation and Wintec also brings awareness to breast cancer in men. In fact, according to the American Cancer Society, 2,360 new cases of intensive breast cancer will be diagnosed in men in 2014. As Levesque-Pharoah says, “We all have to be breast aware.”

She continues, “As long as this machine is clearing the Winnipeg streets, it will be helping create a future without breast cancer… one snowflake at a time.”