Record achieved 28 years after the company introduced its first excavator 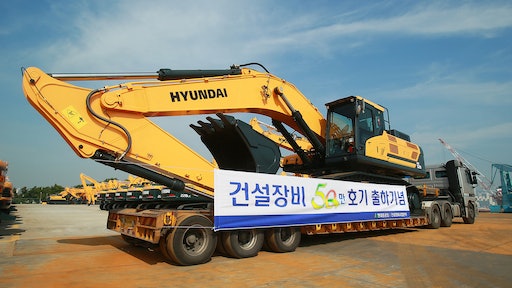 The 500,000th piece of construction equipment to roll off the HHI assembly line was an HX520 excavator.

The 500,000 construction equipment production record was achieved 28 years after the company introduced its first excavator in 1987. Although the company started the business with 426 new excavators in 1987, it has now emerged as a major player in the market with the broadest product range among Korean makers. HHI’s product lines include 1.5-ton excavators, 30-ton forklifts, and Korea’s largest 120-ton excavators. The company recently announced its eco-friendly and high efficiency HX series excavator models.

HHI, headquartered in Ulsan, South Korea, has been active in making inroads into global construction equipment markets with five overseas production factories in China, India and Brazil. Through its efforts in R&D, differentiated customer services and marketing activities, HHI achieved $2.7 billion in global sales in 2014. This year, the company targets to secure $3.0 billion in global sales.

Mr. Rhee Sang-gi, COO of Construction Equipment Division of HHI, said, “We will continue to introduce new models with improved quality and performance and solidify our position as a reliable maker in the international construction equipment market.”