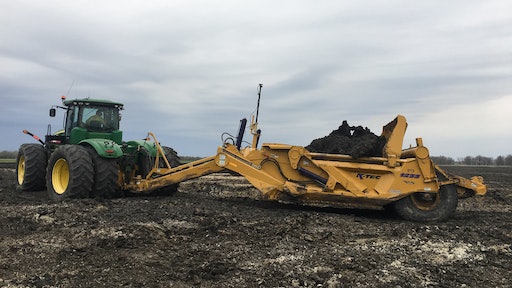 Earth Max started out with a used K-Tec scraper and later purchased two new K-Tec 1233 scrapers, each of which holds a 33-cu.-yd. heaped capacity.

“We bought our first scraper about six years ago,” says Randal Dueck, Earth Max construction project manager. “It was a used K-Tec scraper and it has worked fantastic for us. We liked it so much that we decided to buy a few more.” This purchase included two new K-Tec 1233 scrapers, each of which holds a 33-cu.-yd. heaped capacity.

The acquisition changed Earth Max’s operations. “With the scrapers vs. hauling with a rock truck, we get to go in a lot wetter conditions. We don’t rut up the clay nearly as much, so we can haul a lot more clay without making a mess,” says Dueck. “The efficiency is also a lot higher, as we only have one machine running vs. two on an excavator load.”

Conditions are less than ideal working in the sticky gumbo clay of the Red River Valley, and even more so when unexpected torrential rains hit. The performance of its earthmoving systems would have a direct impact on the contracts Earth Max was awarded - and the future of two rural communities.

In 2017, Earth Max Construction performed earthwork for a pair of lagoon projects awarded by rural municipalities in southern Manitoba. The pond-like bodies of water are constructed to receive, hold and treat wastewater for a predetermined time period.

Located in the rural municipality of Morris, the Lowe Farm lagoon expansion project required construction of a new secondary lagoon cell to provide the required storage capacity to address and population growth and meet future hydraulic yearly loading of 86,325 cu. yds. per year. The new cell has a storage capacity of 40,580 cu. yds. Removal of the existing berm between the existing two lagoon cells was needed to create one new primary lagoon cell.

The cost of the project was split evenly between all three levels of government. "The tender bids though did come in significantly below engineered estimates, so we're hoping that the project will be able to be completed for somewhat less than the $1.5 million. The work for dirt moving came in considerably lower than the estimated amount," stated Ralph Groening, Rural Municipality of Morris Reeve, at the start of the project.

“We did some research and discovered that the low bidder for the Lowe Farm lagoon project as well as the second lowest bidder use exclusively scrapers manufactured by K-Tec Earthmovers,” Groening commented.

As the project progressed, the projected project cost was revised down to $905,000. In the end, the actual cost was $442,000, with Earth Max’s earthmoving efficiency providing substantial project cost savings. By shaving more than $1 million off the initial project estimates, the rural municipality is able to tackle more public works projects, offering greater value to the tax dollars of the community.

Another lagoon project in St. Pierre required 196,000 cu. yds. of earthwork to double the lagoon capacity, which currently allows for a capacity of 150 additional homes, or 2,000 residents. This project included construction of a new secondary cell and a new wetland cell.

Earthwork activities were comprised of topsoil stripping, stockpiling, excavation, embankment and dyke removal. Earth Max Construction started the project in May 2017. Although higher rain amounts were encountered, the flotation of the scrapers enabled the contractor to work most days and complete the project that July.

“We’ve been on a development freeze going on five years, so there has been very limited new construction in the community,” says Mona Fallis, Mayor of the Village of St. Pierre. “The lagoon expansion allows us to approve and expand new developments, and subdivisions. Commercial construction can now move ahead, so this is a huge benefit for our community.”

“There hardly is anything to service on the scrapers. We grease them regularly and they go to work,” he states. “The guys at the shop look through them once a year and that is it. There’s never anything that breaks on them.”

Having only two daily grease points makes a difference in productivity, as well. Instead of searching for numerous grease points, operators are able to move more dirt, which helps contractors like Earth Max get ahead of projected schedules.

[VIDEO] Scraper Selection: 6 Factors That Determine Whether to Use Direct Mount or ADT

This informational video will help contractors determine which scraper setup can move the material most efficiently.
May 27, 2016

Li’l Spike is a 4- to 6-ft-wide grader designed to be towed by an ATV, UTV or mower to groom crushed rock
Hoelscher Inc.
October 13, 2014

Cross-cut design attacks washboards, ruts and potholes from opposing angles with two blades, smoothing the surface in one pass without leaving a windrow
Hoelscher Inc.
August 20, 2014

Features and specifications of the Model 6510 Construction Disc
October 10, 2012

Get More Pull From Your Scraper System

Optimize performance of towed pan scrapers with proper selection and setup of your pull scraper and tractor.
Curt Bennink
August 20, 2012