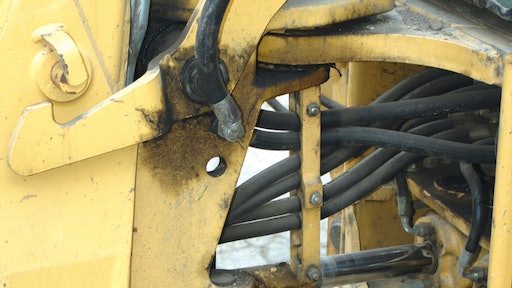 Understand the requirements of each grease joint, including how much grease should be used and how often it is needed.

"Many times, grease is not only the lubricant, but it is the barrier to contamination," says Stede Granger, OEM technical manager, Shell Lubricants.

"Make sure you review the requirements of your equipment," says Granger. "Then work with a grease supplier and make sure everybody agrees that this is the right grease for the application."

Snyder stresses the importance of using the right product in the right place at the right time and in the right amount. Considerations include base fluid viscosity, pumpability, load carrying capabilities (extreme pressure/antiwear properties), water ingression and operating conditions.

"In some heavy equipment maintenance manuals, you will find very vague descriptions for a grease recommendation such as 'bearing grease' and 'multi-purpose type grease," says Kim Smallwood, grease product manager for Citgo Lubricants. "The information does not give you much help in selecting the right grease."

"Compare the various grease tests as shown on the product information sheet to select the best grease for the application," Smallwood advises.

Make sure the product is up to the task. A "one-grease-fits-all" approach to minimize inventory is not always the correct solution.

"The stiffness of the grease tells you how well it stays in the joint," says Granger. "For off-highway [applications], you probably want to stay with a NLGI #2."

An exception would be when working in cold weather. You may need to drop down to a NLGI #1 to ensure pumpability.

"Under a wide variation of temperatures (hot to cold), the case can be made to use an NLGI #2 grade during the warmer summer months, and when the temperature falls below 60° F, switch to a NLGI #1 grade grease," says Smallwood. "If you continue use of a NLGI #2 grade grease [during colder weather], the operator may think the equipment is a little harder to operate."

Another option is to use a synthetic grease year round. "Synthetic grease provides similar or better performance qualities," says Smallwood. "As the temperatures fall, synthetic grease will provide the added benefit of continuing to work, giving the operator a sense that the equipment is operating the way it should."

"Autolube systems generally use smaller lines," Granger notes. "To pump heavier grease through the smaller lines would be difficult. But you don't need a grease that is going to stay in the joint a longer time, because you are going to have an interval that is fairly short. You are going to pump a little bit of grease fairly frequently. The grease that is spec'd for an autolube system may be a NLGI #0. In some cases, it might even be a NLGI #00, depending upon the system and the application."

Of course, you also have to consider additives, such as moly, and the weight of the base oil when selecting grease.

"[NLGI] only measures one physical property of the grease," says Granger. "Predominately, what performs the lubrication is the oil that we put into the grease. The general rule for oils is the slower it turns, the heavier oil you use."

Two greases with the same NLGI grade aren't necessarily compatible. "Many greases utilize different thickener systems, which can be incompatible with each other," says Smallwood. "When mixed, these thickeners can soften or possibly run out of the bearing or bushing. If you do switch between different thickener systems, your maintenance program should allow for thorough purging of all the old grease with the new grease."

When using a manual grease pump system, such as a grease gun, always consider safety first. While these devices appear simple, there is an injection hazard if you don't understand proper technique. "Grease guns generate extremely high pressures," says Snyder.

Then make sure the system can effectively deliver the grease where it's needed. "Sometimes grease distribution systems are so bad, they can hardly get the grease to the end of the gun let alone into the equipment," says Granger. "So a good pumping system is key." This is especially important when you are trying to pump grease in cold weather.

"We have worked with companies to ensure their grease distribution systems could flow enough grease," says Granger. "Some shops measured the amount of grease and the amount of pressure each system put out. It was really surprising to find the differences in the amount of output between the various systems. I cannot emphasize enough that if you use a system to pump the grease, then it needs to be able to pump that grease through the zerk fittings and be able to flow inside the joint."

"However, this is not the only failure that may occur and prevent proper operation and lubrication," he continues. "Soap residue buildup, cold temperature application without proper product selection and contamination (like dirt, welding dust, etc.) in the product could generate blockages that yield high-pressure faults and ineffective system operation."

Not All grease points are alike

"You need to understand each grease application and each grease point," says Granger. "Some joints hold grease better than others. You definitely want to get grease in there in the proper interval."

One of the most common mistakes is not greasing enough. Don't try to save costs by cutting intervals. "Many choices are being made to cut costs and usually the maintenance program will suffer the most," says Smallwood. "When determining the point at which to re-grease, a costly mistake is to wait until you hear the sound of metal grinding on metal. This creates metal flakes in the bearing or bushing that eventually lead to failure."

You can't treat all grease points the same. Consider large pin-and-bushing joints. "You probably want to grease until you see new grease purging out. Purging of the new grease helps remove contaminants," says Granger. "But there are also cases where you do not want to purge grease through a joint." If it has a tight seal that is not made for purging grease, you may damage it. You also don't want to purge grease through bearings.

"Clean grease zerks are a must in your preventive maintenance practice," says Smallwood. "Grease attracts dirt and becomes caked up on the fittings. When you re-grease before cleaning off the grease zerks, you will push dirt inside the bushing or bearing, which will act as an abrasive and can lead to premature failure."

You also need to keep contaminants out of the grease. "I have seen cases where contractors are pumping out of a drum where the lid is not on tight and it is allowing contaminants — dust particulates and rain — to enter," says Granger.

*This article was originally published in 2012.

The AED Foundation distributes more than 4,800 technical tests, that help dealers ensure they are hiring qualified applicants that fit their dealership’s needs, since 2015.
AED Foundation
January 6, 2021

No one parameter alone can provide a complete picture of health; a more comprehensive mix of indicators is needed to determine oil health and performance.
Chevron Corp
January 6, 2021

To eliminate (or reduce) frictional wear, lubricants must have the correct viscosity as well as the appropriate anti-wear or extreme-pressure additive chemistry.
November 25, 2020