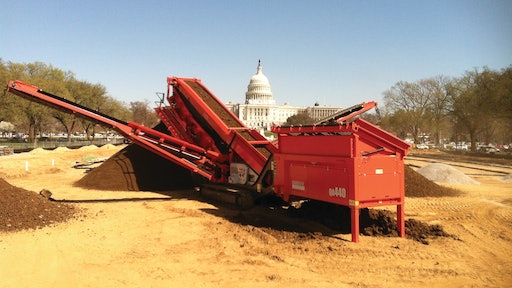 The National Mall in Washington D.C. is one of the most popular tourist destinations in the U.S., and site to presidential inaugurations and political rallies. With an estimated 24 million visitors a year walking on the grounds, the soil has been so heavily trampled and compacted that grass has been hard to grow. The state of disrepair of this national symbol has long called for renovation of its grounds.

Stancills Inc. is a family owned and operated engineered soils manufacturing company located along the northern shores of the Chesapeake Bay in Maryland. It was founded in 1934 by G.L. Stancill, a farmer from North Carolina who ventured into the business of sand and gravel mining. The business is now operated by three of G.L.’s four sons.

As the D.C. area grew, the supply of construction materials became a very competitive market and a new strategy was needed to stay ahead of the game. The demand for manufactured soil in the region, combined with environmental legislation requiring the use of specialized soils for storm water mitigation, made the engineered soils business a worthwhile means for Stancills to diversify its operations.

The company's attention to detail toward customers’ current and future needs allowed the new business model to thrive and made Stancills Inc. the engineered soil supplier of choice within the region. This prestige proved essential in winning the contract for screening topsoil at the National Mall.

Screener Does A Fine Job

Renovating the topsoil of one of the country's national symbols is no minor task. On top of this, the material specification required was very fine. Less than ½’’ needed to be sized out from the grounds, which had by then accumulated a considerable amount of debris and gravel.

In order to carry out the job, Stancills chose a Sandvik QA440, which features  patented Doublescreen technology. The QA440 boasts 20’ x 5’ screening decks and has hydraulic folding conveyors designed for stockpiling capabilities. It can be easily maneuvered within the site via the use of remote control and can quickly start production in a different location. This makes it suited for high-production screening jobs even in spaces with restricted access, such as locations within urban areas.

The work involved feeding the stockpiled, excavated soil directly into the hopper with a loader. The QA440’s hopper can handle up to 14.8 cu. yds. and can also be fed from an excavator or another screener.

In order to achieve the < 1/2’’ final product size required, the machine was fitted with 2’’ and 1/2’’ square meshes, with the top mesh screening out oversize material, which proved abundant in this project. The Doublescreen design allowed for the two screen boxes to be positioned at different angles to one another. In this case, the primary box was positioned at very steep angles in order to quickly eliminate the oversize. The secondary box then acted as a highly efficient secondary grader. The combination enabled Stancills to meet the project specs and successfully complete the screening project.

Rain or shine, your work must get done. Our ADTs are designed to keep you on solid ground. Demo a machine today!
October 23, 2020
Latest
Crushing & Screening Plants