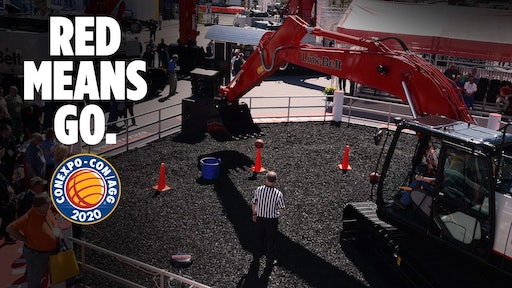 On the Festival Grounds

Eleven Link-Belt machines will be on display at the Festival Grounds, including the 750 X4, 350 X4 Long Front and the 250 X4 SL scrap loader. Three machines will be equipped with Link-Belt Precision Grade grading solutions, powered by Trimble Earthworks. Also featured will be the next-generation Link-Belt 355 MSR minimum-swing radius prototype machine, along with the new 130 X3E excavator, designed exclusively for the Latin American market.

New Link-Belt scrap and demolition work tools will also be on display at the Festival Grounds. These include the LXS 95R shear and LSG 100 scrap grapple.

In the North Hall

At the North Hall, visitors can start with the basic configurations of the Link-Belt 160 X4 excavator, and then add a variety of colors and graphics to create their own unique machine design. They’ll even get a customized memento to take away with them.

The North Hall location also provides a sneak peek into the future of customer support. On display will be an augmented reality (AR) service tool that connects dealer service technicians in the field to remotely based master technicians. Both parties can collaborate in real time to diagnose and repair machines.

Visitors in the North Hall will also be able to use AR-enabled tablets to experience the 355 MSR prototype machine located at the Festival Grounds.

The next generation of WAVES (Wide-Angle Visual Enhancement System), featuring a human detection function, will be installed on a Link-Belt 210 X4 in the hall. A yellow box indicates a person’s nearby presence, which changes to red if they get in close proximity to the machine.

This year marks the 6th Rodeo Showdown at CONEXPO. Located at the Festival Grounds, this popular event challenges operators to pick up a series of three basketballs sitting on cones placed in front of a 210 X4 excavator and attempt to scoop up all three into a plastic bucket without knocking over a cone or dropping a basketball. The reigning Rodeo Showdown world record holder, Shane Rhodehouse, will be competing to defend his record of 00:08.59. The winner will take home an all-expenses paid vacation. The North Hall location will feature a live feed from the Showdown.

Diggin' For a Cure

The Festival Grounds will also feature “Pink-Belt,” a 15.2‐metric ton 145 X4 Link-Belt hydraulic excavator painted pink to show support for breast cancer awareness. This machine will be used for a dice roll, appropriate for operators of all ages. Pink-Belt was on display at 13 different Link-Belt Excavators dealers as it made its way across the country to CONEXPO 2020. It will be auctioned off on Thursday, March 12, with 100% of the money raised to be donated to the Susan G. Komen Foundation and the CHI Saint Joseph Health’s “Yes, Mamm” program.

CONEXPO-CON/AGG is North America’s largest trade show. It will take place from March 10-14 in Las Vegas, NV. For more information about Link-Belt Excavators at the show, visit www.lbxco.com/conexpo