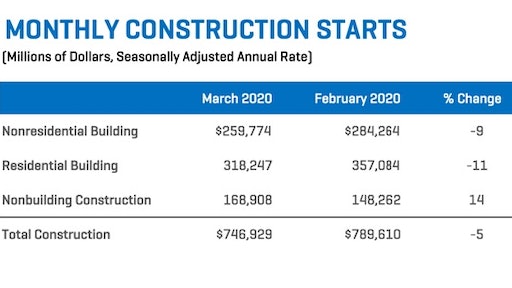 Total construction starts declined 5% from February to March to a seasonally adjusted annual rate of $746.9 billion. Volatility caused by the presence or absence of large projects in healthcare and the utility/gas plant category, however, skewed the analysis. In March, nonresidential building starts fell 9% from February (seasonally adjusted), while residential building dropped 11%. Nonbuilding construction starts, however, rose 14% during the month. 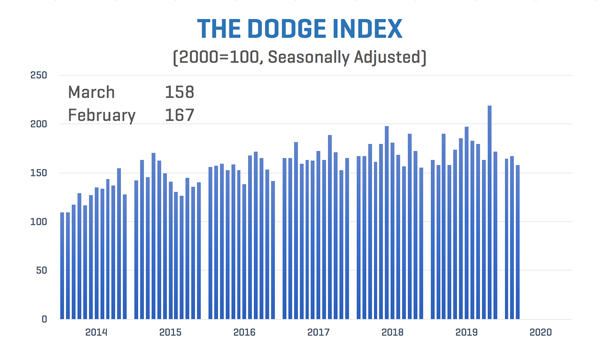 “Considering the calamity that occurred toward the end of March as the fallout from the COVID-19 (Coronavirus) hit the economy, construction starts held up rather well,” stated Richard Branch Chief Economist for Dodge Data & Analytics. “Construction starts in March were unlikely to be greatly impacted as projects that broke ground during the month likely had materials sourced and in-place and labor booked well ahead of the scheduled groundbreaking. That momentum and planning is difficult to reverse at the last minute.

"Additionally, most of the stay-at-home orders and construction moratoriums were not instituted until the last week of the month and into April," he continued. "Therefore, April construction starts are likely to be a very different story with states like New York, New Jersey, and Pennsylvania among others banning construction activity. April’s starts data will be the first true indication of how the crisis will impact the construction industry.”

Nonbuilding construction jumped 14% in March to a seasonally adjusted annual rate of $168.9 billion due to the start of several large electric power facilities. When the massive 161% gain in the utility/gas plant category is removed from the total, nonbuilding starts fell 9% during the month. Highway and bridge starts rose 5%, although the environmental public works category dropped 5% and the miscellaneous nonbuilding category fell 44%.

The largest nonbuilding project to break ground in March was the $1.0 billion 1,085 MW Indeck Niles Energy Center power plant in Niles MI. Also starting in March were the $600 million Jordan Creek Wind Farm in Williamsport IN and the $469 million Titan Solar Project in Culberson county TX.

Nonresidential building starts fell 9% in from February to March to a seasonally adjusted $259.8 billion. Commercial building starts were 5% lower, with losses in three of the five commercial sub-categories (warehouses and parking structures made gains). Manufacturing buildings dropped 7% during the month, while institutional buildings dropped 12%. Institutional buildings posted a large gain in February due to the start of several large healthcare facilities, which were not present in the March statistics. However, education facilities posted a solid 18% gain in March.