Chicago Pneumatic Construction Equipment (CP) has launched their first LED light tower to the North American market with the introduction of the CPLT V5+ HiLight, joining the CPLT V4 metal halide version in the CP lineup. 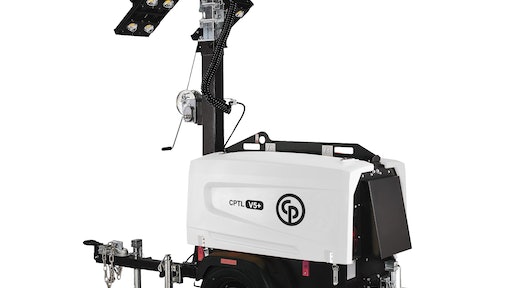 Chicago Pneumatic Construction Equipment has launched their first LED light tower to the North American market with the introduction of the CPLT V5+ HiLight, joining the CPLT V4 metal halide version in the CP lineup. The new high-performance light tower features a heavy-duty polyethylene canopy for rugged durability and is designed to withstand the most extreme elements and working conditions. The canopy coupled with the light tower’s compact size, ease of transportation, safety features and lighting performance makes the CPLT V5+ a great solution on any jobsite. It can be used in a wide range of applications and industries, including public lighting, events, roadwork, construction sites and general industry work.

Join us to hear what types of jobs suit excavators best and what factors to consider when making your selection. Plus, you’ll learn about the attachments and technologies available to make your excavator even more versatile, efficient and productive.
March 4, 2021