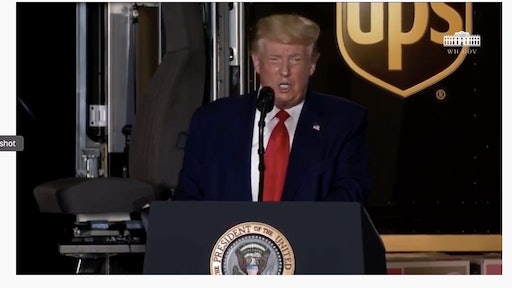 President Trump has talked about boosting funding for infrastructure since his campaign began in 2016 but we have yet to see any substantial funding come to fruition. As his bid for re-election is just months away, the president is again turning to infrastructure as a way to gain support from voters.

On Wednesday, the President discussed rolling back the National Environmental Policy Act (NEPA) speaking at UPS in Atlanta, touting the importance of infrastructure to the movement of goods and services.

“For decades the single biggest obstacle has been the mountains and mountains of bureaucratic red tape in Washington,” Trump said. “All of that ends today. We’re doing something very dramatic. We just completed an unprecedented top to bottom overhaul of the infrastructure approval process that has cost trillions of dollars and delays like you wouldn’t believe.

"This means better roads, bridges tunnels and highways for every citizens across our land. We’re reclaiming America’s proud heritage as a nation of builders and a nation that can get things done."

The announcement will unilaterally weaken NEPA, limiting public review of federal infrastructure projects to speed up the permitting of freeways, power plants and pipelines. In doing so, the Trump administration claimed it will save hundreds of millions of dollars over almost a decade by significantly reducing the amount of time allowed to complete reviews of major infrastructure projects.

"Under the last administration a mere 7% of projects for Federal highways were processed within two years. Now two years won’t be the exception, it will be the rule. This will reduce approval times for highways alone by at least 70%," Trump said. "This NEPA update will shorten average environmental review time from an unacceptable four-and-a-half years to just two years—ensuring that safe, modern and resilient infrastructure can be built in record time while continuing to protect America’s environmental heritage.

"There will never be a veto for America’s future. My commitment to each of you is very simple. America’s infrastructure will be the envy of the entire world as it was many many years ago. Together we are building our incredible future with American hands, American heart and American steel. As your president I have never been more determined that America's infrastructure will be second to none. Under this administration we will always put America first."

Moving projects forward faster is great for the construction industry as we continue to recover from the COVID-19 crisis. Republican lawmakers, the oil and gas industry, construction companies, home builders and other businesses have long said the federal permitting process takes too long, and accused environmentalists of using the law to tie up projects they oppose. Federal and state projects will benefit from fewer delays and the nation will benefit if these projects are done safely and correctly.

"We want to streamline the process, cut the red tape and make sure the environment is protected," Russell McMurry, commissioner of the Georgia Department of Transportation said. "This is another environmental process improvement that will make life much easier for people like us at the department of transportations across the nation to deliver infrastructure projects."

"We will not allow our nation to be hamstrung by wasteful Washington regulations," Trump said. "The Biden administration opposed all of our permitting reforms and wants to increase the length of the permitting process. Biden is happy to tie up projects in red tape and we want to get things built. Unbelievable."

The Cost of Cutting Red Tape?

Cutting infrastructure red tape has been a priority of the Trump administration to the dismay of some in our country. In August 2017, President Trump issued Executive Order (EO) 13807, to reduce unnecessary duplication and uncertainty in the Federal environmental review and authorization process that can delay major infrastructure projects and hold back the American economy.

Revising the 50-year-old NEPA law through regulatory reinterpretation is one of the biggest — and most audacious — deregulatory actions of the Trump administration, which to date has moved to roll back 100 rules protecting clean air and water, and others that aim to reduce the threat of human-caused climate change.

On Tuesday, Biden announced his plan and promised to reverse those roll backs in order to protect citizens and our environment.

In addition, environmental and racial justice groups are opposed to the move as they cast NEPA as a safeguard for low-income and minority communities that are disproportionately located near heavy-polluting industrial operations.