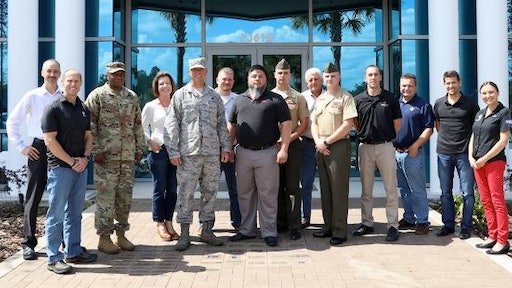 NCCER recognizes the members of the military council, Darren Amick of Bechtel, John Boerstler of NextOp, Jacob Guzman of KBR, Shane Hair of Day and Zimmermann, Chris Newton of Cajun Industries and David Theriot of Performance Contractors, for their hard work and dedication, along with special thanks to the Army, Navy, Air Force and Marines representatives for their participation.

NCCER is celebrating the one-year anniversary of the Hard Hat Heroes Credentialing Portal. NCCER salutes veterans by providing resources to help create a seamless transition into the construction workforce. The Build Your Future (BYF) military initiative, Hard Hat Heroes, provides a way for veterans to receive NCCER credentials for the skills and training they received while in the service.

Hard Hat Heroes gained great momentum in 2017 by creating a military advisory council consisting of veterans and industry representatives whose focus is on recruiting, training and retaining military service members in the construction industry. The ultimate goal of this council is to recruit veterans into the construction industry and to help ensure that they have rewarding and sustainable careers through the use of resources and support of NCCER and its BYF Hard Hat Heroes initiative.

In addition, the number of alignments provided in the portal grew from 10 to 70 as a result of the collaborative efforts from the military advisory council, Army, Air Force, Navy and Marine Corps representatives. These efforts were further highlighted by a workshop hosted by NCCER on Sept. 20 to 22, 2017. The alignments now available are 19 Army MOS codes, 36 Seabee Rates, 12 Air Force AFSCs and three Marine Corps MOS codes. Hard Hat Heroes has also released rank-based alignments for the four branches where service members are eligible to receive NCCER’s leadership credentials for the training they obtained while serving. The extensive expansion will continue as more alignments are scheduled to be released early 2018.

Along with the alignments and credentials provided by the initiative, Hard Hat Heroes works directly with NextOp, a Houston-based veterans’ advocacy group run by veterans, to provide career counseling and assistance with job placement.

It is the commitment of those involved in this effort that has made it possible. NCCER would like to recognize the members of the military council, Darren Amick of Bechtel, John Boerstler of NextOp, Jacob Guzman of KBR, Shane Hair of Day and Zimmermann, Chris Newton of Cajun Industries and David Theriot of Performance Contractors, for their hard work and dedication, along with special thanks to the Army, Navy, Air Force and Marines representatives for their participation.

To apply for credit towards NCCER credentials or view the task alignments, visit the Hard Hat Heroes portal at veterans.byf.org. Additional resources for BYF’s full military recruitment initiative are available at byf.org.