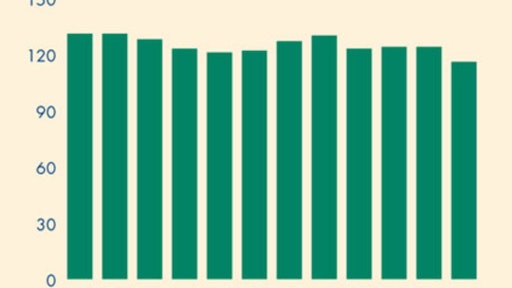 Overall CONFINDEX reading declined by more than 6% during the first quarter and is down more than 10% on a year-over-year basis.
Construction Financial Management Association

The Construction Financial Management Association (CFMA) announced the results of its quarterly CONFINDEX survey showing that the overall CONFINDEX reading declined by more than 6% during the first quarter and is down more than 10% on a year-over-year basis. Overall, CONFINDEX stood at 116 during the second quarter, after holding steady at 124 for the last two quarters of 2017.

“Undoubtedly, construction CFOs, who were concerned about profit margins in earlier quarters given expanding worker shortages, are now even more concerned given recent spikes in fuel and softwood lumber prices and the implications of recently enacted tariffs on steel and aluminum,” notes CFMA’s Economic Advisor Anirban Basu.

CONFINDEX is CFMA's proprietary confidence index survey of CFOs in the commercial construction sector. It is the only confidence index survey asking the level of confidence from important decision makers in a critical industry of the U.S. economy. CONFINDEX is compiled from four sub-indices measuring critical components of the financial health of a commercial construction company: Business Conditions, Financial Conditions, Current Conditions, and Year-Ahead Outlook. Less than a 100 reading indicates pessimism among the survey participants, while a reading more than 100 indicates optimism among the survey participants.

The imposition of tariffs on steel and aluminum will presumably raise construction materials prices. But there are broader potential implications, including higher inflation, rising interest rates, diminished developer and financier confidence, and ultimately fewer projects. The proportion of CONFINDEX survey respondents indicating that they were very or highly concerned about demand for construction rose from 5% to 11% during 2018’s first quarter.

Some of this concern may also be linked to the lack of progress regarding an American infrastructure package. Infrastructure has been at the center of considerable discussion, but little action.

These dynamics likely also help explain the dip in the Business Conditions Index, which slid nearly 9% on a quarterly basis and is down by approximately 13% on a year-ago basis. The Financial Conditions Index, which one might have thought would have been improving post-tax cut and in the context of banking regulations, fell 4.2% during the quarter and is nearly 9% lower relative to its level last year. Similarly, the Current Confidence Index fell more than 5% during the quarter. It is also down on a year-over-year basis.

However, nothing is as revealing regarding recent construction CFO attitudes than the Year-Ahead Outlook Index, which declined by nearly 8% for the quarter and is down by 18% on a year-over-year basis. That represents the largest year-over-year decline in any of the CONFINDEX readings.

“Issues related to worker shortages also remain front and center. A quarter ago, 81% of respondents indicated that they were very or highly concerned by skills shortages. That percentage has not changed,” notes CFMA President & CEO Stuart Binstock.

What has changed is the outlook for profit margins. While 47% of respondents indicate that their margins have been widening recently, only 21% expect them to improve over the next year. It is likely that many of these CFOs are unnerved by rising materials prices and prospects for further appreciation.

The next CONFINDEX survey and results will be released in June 2018.