Since November 2016, the 12-month moving average open positions rate has exceeded the rate during the pre-recession building boom 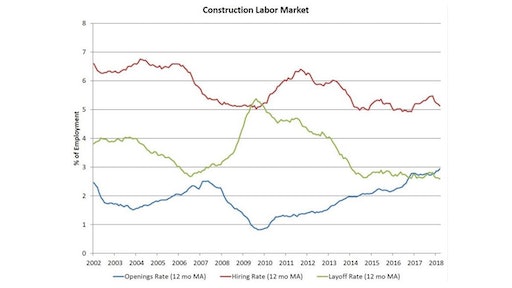 The count of unfilled jobs in the construction sector increased in March and approached the post-Great Recession high level.

The open position rate (job openings as a percentage of total employment plus current job openings) for March increased to 3.4%. On a smoothed, twelve-month moving average basis, the open position rate for the construction sector remained at 2.9%, a post-recession high. The peak (smoothed) rate during the building boom prior to the recession was just below 2.7%. For the current cycle, the sector has been above that rate since November 2016.

NAHB expects construction sector net hiring to continue in 2018 as the single-family construction market expands. However, as labor remains a top cited challenge to expansion, builders will increasingly explore options to find ways to build more with less.