Gov. Pritzker proposes doubling motor fuel tax to 38 cents per gallon and the registration costs for late-model vehicles to $199 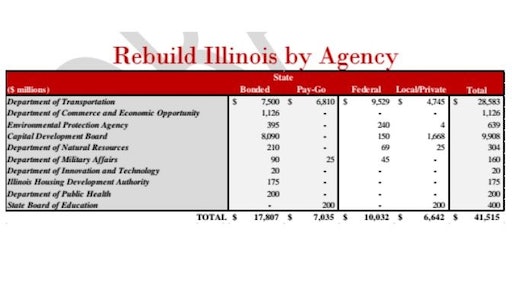 Illinois would pour $41.5 billion into construction over six years to rebuild and maintain roads, mass transit, schools and affordable housing, recreation areas, expand broadband and more under a plan by Gov. J.B. Pritzker.

Pritzker proposes doubling the state’s current motor fuel tax, to 38 cents per gallon, and the cost to register a car less than three years old to $199 per year.

The proposal reserves $23 billion for roads and bridges, more than half of which would go to new construction, along with $3.4 billion for mass transit and $440 million for an ongoing transportation efficiency program in the Chicago region.

Education would get $5.9 billion. There’s $1 billion for renewable energy works and environmental, conservation and recreation projects.