$6.8B in Tariff Costs to U.S. Businesses and Consumers is Highest Monthly Total in History 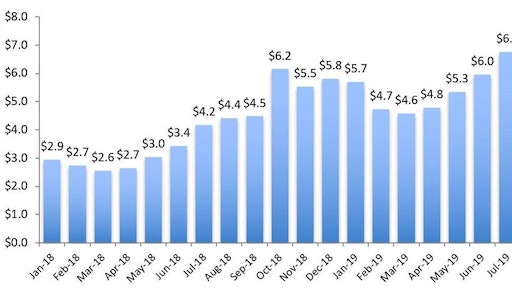 Total US Tariffs Paid by Month
Tariffs Hurt the Heartland

New data released by Tariffs Hurt the Heartland, a coalition of more than 150 associations from every sector of the U.S. economy, shows that tariffs cost U.S. business and consumers $6.8 billion in July, the highest monthly total in U.S. history. The $6.8 billion in overall tariffs paid is a 62% increase from July 2018, driven by $3.5 billion in new tariffs on goods imported from China.

July marked the first full month of data collected after tariffs on many of those products increased from 10% to 25% earlier this year. The data does not include recent and upcoming tariff increases on nearly $300 billion in additional imports.

“These historic tariff increases are what’s causing significant uncertainty for American employers, leading to less investment, higher prices and fewer job opportunities,” says Jonathan Gold, Tariffs Hurt the Heartland spokesman. “You can’t budget for a double-digit tariff increase… The administration needs to use upcoming negotiations to end a trade war that truly has no winners."

In total, American taxpayers have now paid over $30 billion in extra import tariffs from the beginning of the trade war in 2018 through July of this year. The data released today also showed how the trade war and retaliatory tariffs are dragging down American exports. The July data shows that American exports being targeted for retaliation have now declined for 13 straight months when compared to the same month in the previous year.

"These tariffs are increasingly hurting American workers and their families," stated Dennis Slater, president of the Association of Equipment Manufacturers, in a statement following the data's. "U.S. taxpayers have paid over $30 billion in extra import tariffs according to the new data released today and that number will rise as the situation worsens. It shows again that these tariffs don’t work and are serving as a tax on American consumers. It’s time to end this trade war. Americans across the country, including our industry's 1.3 million men and women, deserve better."

While the tariffs paid by Americans are at historically high levels, the situation has only grown worse in recent weeks. Tariffs on products currently at 25% are now set to increase to 30% on October 1. Tariffs of 15% on an additional $112 billion in Chinese imports took effect on September 1, and another $160 billion in Chinese imports will face 15% tariffs on December 15. 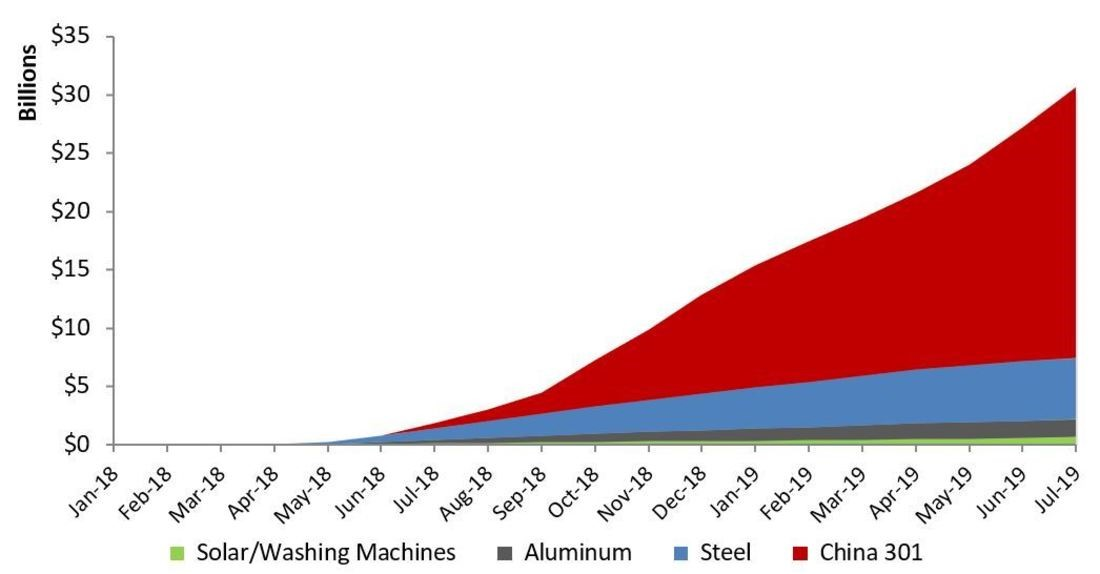 The data released today is part of a monthly Tariff Tracker that Tariffs Hurt the Heartland has launched in conjunction with The Trade Partnership, which compiles monthly data released by the U.S. government. The monthly import data is calculated using data from the U.S. Census Bureau. The monthly export data is compiled using data from the Census Bureau and the U.S. Department of Agriculture. As part of the Tariff Tracker project, Tariffs Hurt the Heartland is also releasing data on how individual states have been impacted by increased import tariffs and declining exports.