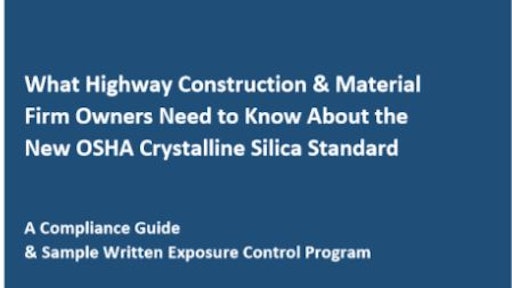 The “plain-English” publication contains key background materials and provides guidance on the four basic steps for complying with the agency’s requirements. The guide is available for $10 and may be purchased at www.artbastore.org.

Crystalline silica is a mineral commonly found in sand, rock, concrete and masonry products. It becomes dangerous when silica-containing products are broken, crushed, drilled, cut, etc. and produce a fine dust that is breathed into the lungs. Silica damages lung tissue and can lead to a serious, and sometimes fatal, lung disease called “silicosis.”

On March 26, 2016, OSHA published its final rule affecting workers in the general, marine and construction industries. Although the rule took effect June 23, 2016, the construction industry was given until September 23, 2017, to comply. In a September 20th memo, OSHA said that for the first 30 days of the new rule, it would consider whether employers are making “good faith” efforts to meet the new standard before issuing a citation. After that time, a failure to comply could result in the penalties.

ARTBA, along with other construction association allies, filed suit in April 2016 challenging the rule, arguing that OSHA’s standard is based on flawed science and unrealistic assumptions about the construction industry, and could divert significant resources — human and financial — away from activities aimed at mitigating, if not eliminating, documented, serious hazards to workers’ health and safety.