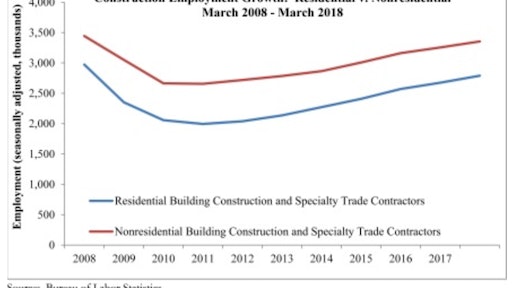 March was a stark reversal in construction employment after February gained a post-recession high of 65,000 net new jobs.
Associated Builders and Contractors

The U.S. construction industry lost 15,000 jobs on net in March, according to an Associated Builders and Contractors (ABC) analysis of data from the U.S. Bureau of Labor Statistics (BLS). This represents a significant reversal from February, when the industry added a post-recession high of 65,000 net new jobs (upwardly revised from +61,000). The construction sector has added 228,000 net new jobs over the past 12 months, which represents a substantial 3.3% increase in the number of workers directly employed by the industry.

“Every employment report is important. Each time the BLS announces new data regarding employment and unemployment, global stock and bond markets move,” said ABC Chief Economist Anirban Basu. “In recent months, we have been watching for indications of either economic slowing in the form of weaker job creation or overheating or in the form of increasingly rapid worker earnings growth. Today’s jobs report however, is being considered largely in the context of an emerging threat to the economic expansion—a trade war with China.

“The hope had been that the job report today would be strong, indicating that the U.S. economy possesses sufficient momentum to steer through a short, highly symbolic trade war,” said Basu. “Instead, the jobs report was weak, with nonfarm industry payrolls rising by a disappointing 103,000 net new positions. Still, the unemployment rate remained at a low 4.1%, which means that the report wasn’t purely negative. Moreover, one month of data tends to be inconclusive regarding the direction of large-scale macroeconomic trends by definition.

“Nonetheless, today’s numbers cannot simply be ignored,” said Basu. “The weak jobs report increases the probability that uncertainty attributable to policy pronouncements emerging from Washington and Beijing can trip up an economic expansion that should be proceeding swimmingly in the context of recently enacted tax reform. For construction firms in particular, the changing news cycle is not helpful. Those who finance construction projects need to be comfortable with the notion that the economy will still be supportive once construction is complete. In other words, the construction industry requires a higher level of stable, persistent confidence to support growth than other industries given the risk that accompanies financing projects and time to build. Confidence is likely dissipating presently.”

[VIDEO] Construction Costs Have Risen 10% in Anticipation of Tariffs’ Effects

With Joe Biden projected to win the presidency and Republicans retaining control of the Senate, experts predict infrastructure may be one of the only things a Biden-led White House and a Republican Senate can agree on
Jessica Lombardo
November 6, 2020
Follow Us