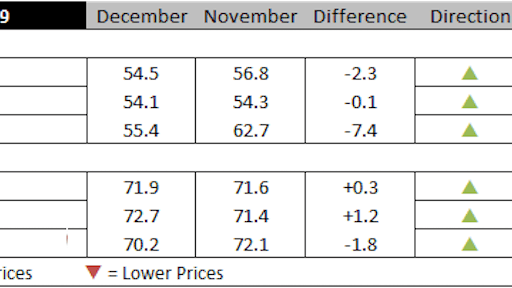 Construction costs increased once again in December, according to IHS Markit and the Procurement Executives Group (PEG). The current headline IHS Markit PEG Engineering and Construction Cost Index registered 54.5 in December, marking the 38th consecutive month of construction costs increases. Both the materials and equipment and the sub-contractor labor indexes indicated continued price increases, with readings of 54.1 and 55.4, respectively.

Survey respondents reported increasing prices for 10 out of the 12 components within the materials and equipment sub-index, with carbon steel pipe and fabricated structural steel prices the only two components to see prices fall in December. Among those components with rising prices were transformers, turbines and electrical equipment, although index figures backed off from last month. Ocean freight prices to the United States from both Asia and Europe also moved higher. A majority of respondents reported higher prices for copper-based wire and cable for the first time since August.

“Sentiment has improved in copper markets primarily on hopes that U.S.- China trade negotiations will yield further progress,” said John Mothersole, director at IHS Markit. “Higher copper prices are also supported by underlying fundamentals, which remain tight due to sluggish production growth over the past year.”

The sub-index for current subcontractor labor costs reported rising labor costs in all regions of the United States and western Canada, while labor costs were flat in eastern Canada. The diffusion index figure remained in positive territory but was lower than last month.

The six-month headline expectations for future construction costs index reflected increasing prices for the 40th consecutive month with the index registering 71.9, a slight uptick from November. The six-month materials and equipment expectations index came in at 72.7 this month, up from 71.4 last month. Prices for all materials, equipment and freight are expected to rise. Expectations for sub-contractor labor ticked down to 70.2 in December, though labor costs are expected to rise in all regions of the U.S. and Canada.