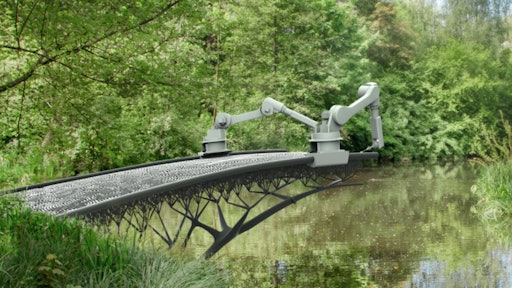 "What distinguishes our technology from traditional 3D printing methods is that we work according to the ‘Printing Outside the box’ principle'," says Tim Geurtjens, CTO MX3D. "By printing with 6-axis industrial robots, we are no longer limited to a square box in which everything happens. Printing a functional, life-size bridge is of course the ideal way to demonstrate the endless possibilities of this technique.”

The first fully functional 3D printed bridge is the brainchild of MX3D — a Dutch technology startup. After completion of the project by 2017, this bridge is destined to be placed in the famous Red Light District of Amsterdam, spanning the dream-like Oudezids Achterburgwal canal in the area. Spectators can witness the construction of this unique 3D printing project on Fridays at its site of building at the northern end of the city.

MX3D is breaking the three greatest obstacles that have preventing 3D printing technology to be adapted into the mainstream manufacturing methods — speed, size and cost.

The bridge is being built in collaboration with the Amsterdam City Council, MX3D and some other large companies. What’s more surprising is the fact that MX3D will construct the entire bridge with the help of autonomous robots, which can print these complex steel structures midair. These torch wielding welder robots are to melt the layers of steel together to form one solid bridge, according to co-founder and chief technology officer of MX3D, Tim Geutjens.

This also happens to be the first project of this magnitude undertaken by the company. In the past, MX3D used robots to build giant furniture pieces and free form sculptures with the help of 3D printing technologies.

Usually with the common techniques, an object is built inside a printing container or volume, then it is placed somewhere else when completed. However, this project is being completed on site with the help of robots who print objects on the go.

Unlike the usual 3D printers on desktop, MX3D’s robots resemble gigantic mechanical arms with a torch like apparatus at the ends. These robots print objects out in the open instead of printing inside a box. With the help of their welding torches, they melt a single layer of steel, covering the layer with more melted steel coming from a wire piece that the robots keep melting.

While most 3D printers can print in only three directions (i.e. forward-backward, left to right and up-down) the robots of MX3D are able to print in all directions possible. To print an object that protrudes from the middle of a wall, the robots simply turn their welding torches to a side. This any directional printing ability gives the company an upper hand while completing a project of such a large scale.

A company that has been working closely with MX3D is California-based CAD software giant Autodesk. The two companies have come together to explore the possibilities of developing software that can help human operators communicate with the 3D printing robots in a more efficient manner. Autodesk is enabling MX3D to test software optimizing computer aided designs in order to easily model objects for the real world construction sphere.

These large 3D printing robots can print as much as they can extend their arms. However, they are able to print out objects that are significantly larger than those printed using other 3D techniques such as Selective Laser Melting (SLM). This was a process first developed in the 90’s, which involves using laser beams to melt tiny titanium or aluminum particles on top of a metal base. Today, SLM technology is used for making medical implants or airplane parts inside small printing volumes. These parts are small enough to fit in shoeboxes, yet the ones created by MX3D’s robots are human scale or larger.

In order to build the bridge over one of Amsterdam’s famous canals, the robots are going to move on a track specifically designed for them. They are to print a portion of the bridge and then go along the track over new sections that require printing next.

Due to the fact that Amsterdam’s streets are too narrow and crowded, the actual printing will not take place in the bridge site. Instead, it is being built inside a warehouse that is situated in the north end of the city. From there, it will be shifted to its future abode, the Red Light District.

Even though the actual cost of the project has not been announced, the authorities over at MX3D inform that the overall cost will be less than SLM method. Geurtjens believes that SLM is still a viable method for parts requiring high accuracy, but it is not suitable or cost effective for creating mega-structures like entire bridges.

Also, compared to traditional steel welding, the process of 3D printing with robots is a much faster process. The robots can build the bridge at least 1,000 times faster than traditional metal welding techniques.

The future is here

Even though the 3D printing robots are not going to take over the metal construction industry anytime soon, the enthusiasts of the field sure are optimistic. There are many limitations of the method, yet the robots can successfully do the more dangerous parts of the job that are too unsafe for humans to be doing. Hence, we can all expect to see these torch bearing robotic arms constructing bridges for heavy vehicles to pry on.

They can also be useful for repairing broken satellites in outer space and repair oil rigs offshore. However, the only place to see metal working robots in action is the visitor’s center of MX3D located in Neveritaweg 15, Amsterdam and open for visitors at 4pm every Friday.

Ronan Ye is the founder and managing director of 3E-RP which is one of China's leaders in rapid prototyping and 3D printing. Upon completing his college degree at Guangzhou University in International Business with honors, Ronan has been heavily involved in China's fast growing rapid prototyping and manufacturing industry.