The crane helps install sheet piling and whalers for the seawall in Charlottetown, Canada 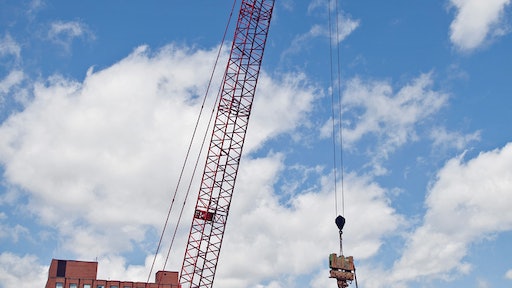 For the pile driving, the crane worked with 247 feet of main boom, a wind tip attachment and a vibratory-hammer to drive the piles.

The Challenge:
Drive sheet piling to form the base of the seawall while operating the crane from land instead of mounting it on a barge.

The Process:
The seawall in Charlottetown, Prince Edward Island, Canada, will reclaim land for the construction the PEI Convention Center, which is being built by the Charlottetown Area Development Corp. The project is being overseen by local general contractor Bert & MacKay Construction.

The Manitowoc 16000 crane, owned and operated by Irving Equipment the pile-driving subcontractor, was initially used to drive sheet piling that forms the base of the seawall. While typical pile driving in marine applications might require a barge-mounted crane, the size and capacity of the 16000 allow it to work on land, operating at radii of between 125 and 180 feet.

Victor Murty, project manager for Irving Equipment, says that operating a large crawler crane from land for these marine applications help mitigate weather, tidal influences and other environmental considerations. "There are definite savings in not mobilizing barges. Plus, it is easier to access materials from land," Murty said.

For the pile driving, the crane worked with 247 feet of main boom, a wind tip attachment and a vibratory-hammer to drive the piles. The wind tip provides greater offset and keeps the hammer and sheet pile away from the boom during installation.

With the installation of sheet piling complete, the 16000 helped another subcontractor install whalers, the cross beams that support the seawall. For this work, the crane again worked at radii of between 125 and 180 feet.