As the company expanded globally, Sinoboom reintroduced a blue product design for the European market in 2018, which was followed by favorable customer feedback. 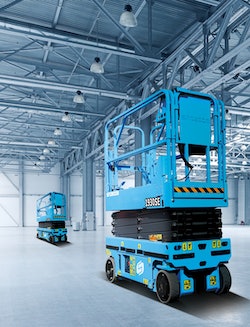 Sinoboom has updated their standard product color scheme for its global customers. The new blue and graphite colors acknowledge the company’s past and future. Founded in 2008, Sinoboom has exclusively focused on MEWP design and manufacturing. Initially introducing its first aerial products in a blue color scheme, its product line and product colors have since evolved.

Up until recently, Sinoboom’s products were red. As the company expanded globally, Sinoboom reintroduced a blue product design for the European market in 2018, which was followed by favorable customer feedback. This, along with wanting to further signal its growth as a global aerial manufacturer, caused Sinoboom’s decision to make a full product line-up color change. The new colors were voted on by the Sinoboom Intelligent Equipment employeess, and the blue and graphite design were the winning colors. They're set to appear on Sinoboom scissor lifts as early as January 2021 in North America.

“The new color scheme further emphasizes Sinoboom's pursuit of reliability, quality, ease of use and excellent design. We also feel it sends a good introductory message to our North American customers, since we recently entered that market. This is our last stop in our global footprint, and we have worked hard and are determined to strongly serve our customers in this new region. The updated product look further enhances that goal and promise," said one of Sinoboom’s founders and General Manager Susan Xu.

Building on the new color scheme, as well as the brand’s global success, Sinoboom is launching a new campaign focused on customers and the important relationships necessary for success. Leading this is a new Sinoboom North America slogan: Partners in Access. This emphasizes Sinoboom’s long-term commitment to support its North American customers beyond products, by building relationships that make rental businesses and end users prosper.

“We are thrilled with these exciting changes happening to Sinoboom’s products and support as we start to make a splash in the North American market," said Kolin Kirschenmann, president and CEO of Sinoboom, North America. "The timing worked out great. We’re eager to see how these developments benefit our customers, but we won’t stop there. We anticipate learning as much as we can from the North American industry and continuously going after our pursuit of product excellence and customer satisfaction."

PAL provides audio and visual warnings when controls are engaged and the lanyard has not been attached to the lanyard anchor in the bucket. The system is designed to reduce the chance of an operator elevating the bucket without a lanyard attached.
Terex Corporation
December 15, 2020
Follow Us