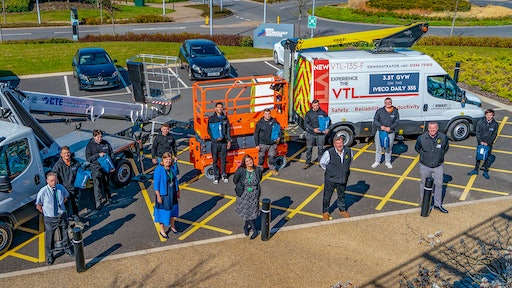 The first wave of apprentices on a new route to certifying specialist MEWP technicians have been celebrated by members of the International Powered Access Federation (IPAF) as they left for North Warwickshire & South Leicestershire College (NWSLC) in the UK.

The Level 3 Lift Truck and Powered Access Technician apprenticeship forms part of IPAF’s Roadmap to Qualified MEWP Technician or Engineer Status, which meets growing demand in the hire and maintenance industry. The first intake of eight apprentices—from Access Engineering, Versalift, Mainline Group, 1 Up Access, Horizon Platforms, CTE UK Ltd, Southern Platforms, and GT Access—was confirmed earlier this year, and a special welcome ceremony was organized for them on their first day at college.

Richard Whiting, IPAF’s UK and Ireland market general manager, joined Peter Douglas, IPAF’s CEO and managing director, and senior college officials to wish the new apprentices well and to recognize their pioneering role as the first entrants to the three-year course, which will include a total of 10 weeks per year studying at the NWSLC campus.

Douglas said, “It’s fantastic to meet these apprentices just starting out on their road to becoming fully qualified engineers specializing in MEWPs. This is something our industry has been crying out for for a long time and is an excellent step both to recognizing and certifying existing talent, and attracting bright new people into a career in powered access."

Whiting, who led the development the IPAF Roadmap, said, “We congratulate this first cohort of apprentices and wish them every success over the next three years and beyond ... In terms of the apprenticeship itself, it is already proving very popular: Two further intakes are planned for Q4 2021, which means there are more than 30 apprentices already in [the] pipeline."

Katy Urwin, director for apprenticeships at NWSLC, said, “We are delighted to mark the launch of this new apprenticeship standard, which is critically important to the mechanical handling industry and marks a step change in the type and quality of skills delivery that businesses can expect. The apprenticeship has been specifically designed in collaboration with employers in the powered access space, and we are delighted to be one of the first colleges in the UK to roll it out from today."

Information provided by IPAF and edited by Alexis Brumm