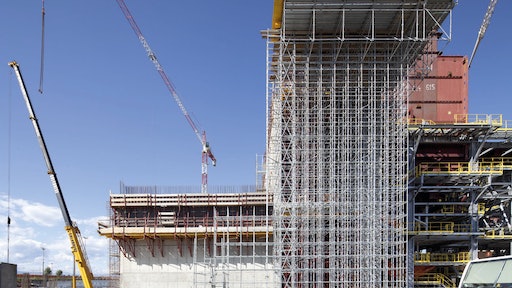 Construction of the waste-to-energy plant of Turin, Italy, made for a challenging jobsite due to considerable and ever evolving construction challenges including tight deadlines.

Pilosio, an Italian manufacturer that provides scaffolding and formwork, supplied materials and equipment for the project including its P300 formworks system used for casting walls 131 feet high and 180 feet long with beams to create all the vertical walls of the waste pit. The beams helped make construction of 13-foot walls a quick job.

A cart model was used to allow maintaining the P300 panelling constantly in line with the beam system, which allowed it to move as a single block for the subsequent higher stages.

Pilosio supplied contrast beams combined with the P300 frameworks for the casting of all “single-face” walls of the waste pit, which, for design reasons, could not be implemented using the “double-face” system. With Pilosio's MP scaffolding applied, it was possible to create approximately 10 service stairs with aluminum steps to access the work floors even at a significant height of 131 feet.

The MP system was chosen to support a portion of the floors at a height of 73 feet thanks to the flexibility of managing several dimensional compositions and due to the need to reach intrados with heights of approximately 82 feet. Thanks to the MP system it was also possible to resolve the issue of supporting significant concentrated loads. Six 36-foot-tall towers were manufactured in order to support a concentrated load of approximately 130 tons per tower.

Pilosio’s technical department designed another custom support structure using the MP system to build contrast struts to temporarily stabilize a free, 57-foot-high wall up to the point of building the cover that would bind it. The contrast struts fastened on the only free walls of the floor to stabilize the 10,763-square-foot wall from a height of over 73 feet up to a height of more than 131 feet. Using the T28 Tower system it was possible to support all floors with high capacity that had linear and simple dimensional characteristics.

With K1 PACE, customers can expect power and performance equivalent to petrol-powered cutters with all the additional benefits battery powered equipment brings to both operators and the environment.
Husqvarna Construction Products
June 10, 2021
Latest
Construction Safety

The new line of JLG Rough Terrain Scissors has an answer for every task. When we say upgrade, we mean business – yours.
June 3, 2021
Construction Safety

Watch the installation of glass panels during the construction from One World Trade Center and find out more about the staging and lifting equipment used
July 12, 2013

EquipmentWatch analysts have taken a deep dive into the impact of brand on pricing for construction, lift and agricultural equipment.
May 24, 2021
Scaffolding

This document provides answers to some of the most common questions about OSHA's scaffold standard for the construction industry
September 4, 2012

IPAF and the US-based SAIA have reaffirmed their alliance to work together in every way possible to promote safety in the use of powered access equipment throughout the USA and Canada.
International Powered Access Federation (IPAF)
August 8, 2012
Construction Safety

Falls are the leading cause of deaths on construction sites, but proper safety procedures and fall protection gear can help save lives on the jobsite.
July 3, 2012

Safway Services has launched a Spanish-language version of its website to better serve and communicate with its South American and Spanish-speaking customers
June 6, 2012
Construction Safety

Cites Quality Stone Veneer with eight safety violations and scaffolding hazards during construction at a residential site
May 10, 2012
Rental

While refurbishment and repair work might have kept some scaffold erectors and dismantlers' books out of the red during the past year, the continued absence of a vibrant new-start construction market is evident in our second annual Scaffold20 list.
August 30, 2011
Scaffolding

Equipment hire firm Ashtead Group has boosted its presence in the Gulf Coast petrochemicals business with the acquisition of Empire Holdings.
January 11, 2011