Four workers were on the scaffolding when it collapsed; two managed to escape or hang on while the other two plunged six stories in the fall 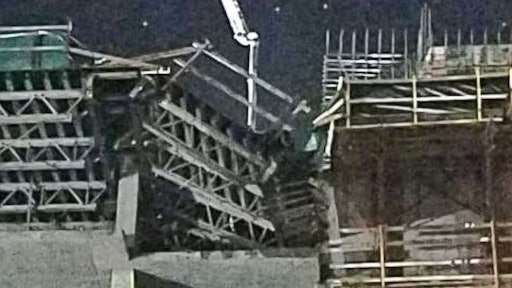 Two construction workers fell to their death at a project being worked on in Orlando, FL, on Wednesday, Aug. 29, 2018.
Orange County fire REscue/ABC News

In the early morning hours of August 29, 2018, two construction workers were killed after the scaffolding they were working on collapsed and they plunged six stories. The accident happened at a hotel under construction in Orlando, FL. Officials said both men died at the scene.

At the time of the report, the reasons for the scaffolding collapse was unknown. OSHA and the Orange County Sheriff's Office will investigate the accident.

(more on the scaffolding accident in Orlando...)

The new line of JLG Rough Terrain Scissors has an answer for every task. When we say upgrade, we mean business – yours.
June 3, 2021
Latest
Scaffolding

Bronx Contractor Facing Over $66,000 in Fines for Fall Hazards

The new line of JLG Rough Terrain Scissors has an answer for every task. When we say upgrade, we mean business – yours.
June 3, 2021
Construction Safety

Watch the installation of glass panels during the construction from One World Trade Center and find out more about the staging and lifting equipment used
July 12, 2013

5 Safety Tips When Working with Scaffolding

Don't sacrifice safety and efficiency for speed; use these five tips from Kee Safety to keep workers safe when working with scaffolding
Kimberly Hegeman
March 25, 2013

This document provides answers to some of the most common questions about OSHA's scaffold standard for the construction industry
September 4, 2012

IPAF and the US-based SAIA have reaffirmed their alliance to work together in every way possible to promote safety in the use of powered access equipment throughout the USA and Canada.
International Powered Access Federation (IPAF)
August 8, 2012
Construction Safety

Falls are the leading cause of deaths on construction sites, but proper safety procedures and fall protection gear can help save lives on the jobsite.
July 3, 2012

Safway Services has launched a Spanish-language version of its website to better serve and communicate with its South American and Spanish-speaking customers
June 6, 2012
Construction Safety

Cites Quality Stone Veneer with eight safety violations and scaffolding hazards during construction at a residential site
May 10, 2012
Rental

While refurbishment and repair work might have kept some scaffold erectors and dismantlers' books out of the red during the past year, the continued absence of a vibrant new-start construction market is evident in our second annual Scaffold20 list.
August 30, 2011
Scaffolding

Equipment hire firm Ashtead Group has boosted its presence in the Gulf Coast petrochemicals business with the acquisition of Empire Holdings.
January 11, 2011