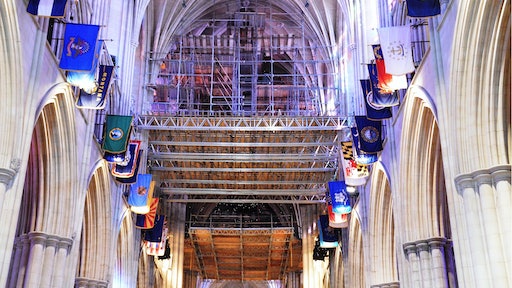 The QuikDeck segments were used as working surfaces at the perimeters of the platform facing the nave, great choir and transept areas. 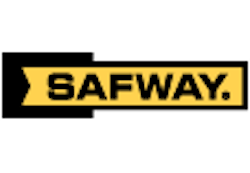 In August 2011, a 5.8 magnitude earthquake caused damages to the National Cathedral in Washington D.C., which resulted in a multi-year project aimed at repairing the national landmark. However, the cathedral needed to remain open for worship, tours and other daily activities throughout the two-year interior phase. A creative solution was needed, and access provider Safway Services has just the answer.

The repair crew used a HAKI Truss product, which allows hand assembly of long, strong trusses, to span as much as 45 feet across traditional scaffolding erected on the clerestory balconies, which are 2-feet-wide ledges above the main areas of the cathedral — the nave, great choir, apse and north and south transepts, according to Steve Quaerna, a sales representative at Safway’s Laurel, MD branch. The trusses were used to create platforms for masonry repairs more than 80 feet above the floor, while pews and other public areas below remained in use. Rolling scaffolds were erected on the elevated platforms to provide access to all areas of the curved ceiling and stained glass windows.

An even more difficult challenge was to provide access to the area above the "crossing" of the church, where the nave and great choir intersect the transepts. There was no ledge on which to rest anything, and the cathedral’s leadership insisted that no support equipment be placed on the church floor in this area.

The answer came from another non-traditional product, QuikDeck, a modular, rigid suspended access system that is often used to reach the underside of large, high structures such as bridges. In this case, 1 1/4-inch wire rope cables were strung through existing holes in the cathedral’s vaulted ceiling, attached to structural supporting systems scaffolding towers in an attic above. The QuikDeck was suspended from these towers via the cables. Its segments can be cantilevered, and such areas were used as working surfaces at the perimeters of the platform facing the nave, great choir and transept areas.

Interior work was completed in late February with no safety-related incidents.

As a result, Safway Services earned a 2015 Craftsmanship Award from the Washington Building Congress (WBC) for its creative solutions to access challenges associated with the repairs on the National Cathedral. Safway's solutions provided general contractor James G. Davis Construction Corporation with access to all of the masonry on the interior phase of the church as well as to the exterior's flying buttresses and other structures.

In nominating Safway for the WBC Craftsmanship Award, Brent Burger, project manager for Davis said, “While the work Safway is doing is impressive [in light of the complex structure], even more remarkable is their ability to perform scaffold erection and dismantling activities constantly surrounded by the sensitive, significant and sometimes brittle historic 'fabric' of the Washington National Cathedral, as well as continuously working in a manner that keeps the Cathedral open to its daily... activities.”

“With these important elements in mind, Safway's careful use of protection materials they put in place every night and remove every morning has mitigated the potential for damage," he added. Burger also noted that Safway was able to keep pace even when work went faster than planned.

Safway was honored in the Scaffolding and Rigging category and received the award at a gala on March 20, 2015. The Washington Building Congress has bestowed the Craftsmanship Awards every year since 1956.

“It’s such an honor for Safway to be entrusted to provide access to yet another important architectural landmark,” Quaerna said. “To receive this Craftsmanship Award makes it all the more satisfying."

The new line of JLG Rough Terrain Scissors has an answer for every task. When we say upgrade, we mean business – yours.
Jun 3rd, 2021
Latest
Construction Safety

Bronx Contractor Facing Over $66,000 in Fines for Fall Hazards

The new line of JLG Rough Terrain Scissors has an answer for every task. When we say upgrade, we mean business – yours.
Jun 3rd, 2021
Construction Safety

Watch the installation of glass panels during the construction from One World Trade Center and find out more about the staging and lifting equipment used
Jul 12th, 2013

5 Safety Tips When Working with Scaffolding

Don't sacrifice safety and efficiency for speed; use these five tips from Kee Safety to keep workers safe when working with scaffolding
Kimberly Hegeman
Mar 25th, 2013

This document provides answers to some of the most common questions about OSHA's scaffold standard for the construction industry
Sep 4th, 2012

IPAF and the US-based SAIA have reaffirmed their alliance to work together in every way possible to promote safety in the use of powered access equipment throughout the USA and Canada.
International Powered Access Federation (IPAF)
Aug 8th, 2012
Construction Safety

Falls are the leading cause of deaths on construction sites, but proper safety procedures and fall protection gear can help save lives on the jobsite.
Jul 3rd, 2012

Safway Services has launched a Spanish-language version of its website to better serve and communicate with its South American and Spanish-speaking customers
Jun 6th, 2012
Construction Safety

Cites Quality Stone Veneer with eight safety violations and scaffolding hazards during construction at a residential site
May 10th, 2012
Rental

While refurbishment and repair work might have kept some scaffold erectors and dismantlers' books out of the red during the past year, the continued absence of a vibrant new-start construction market is evident in our second annual Scaffold20 list.
Aug 30th, 2011
Scaffolding

Equipment hire firm Ashtead Group has boosted its presence in the Gulf Coast petrochemicals business with the acquisition of Empire Holdings.
Jan 11th, 2011