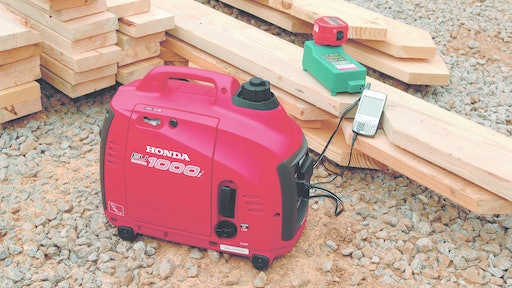 Lighter weight in a smaller package size is driving a transformation on the construction jobsite where many small inverter generators are taking the place of a couple of larger conventional generators to allow workers to charge lithium ion work tool batteries and cell phones.

But the main benefits of lighter weight in a smaller package size are driving a transformation on the construction jobsite. Tom Pernice, Honda Power Equipment, reports that many customers who previously used a larger conventional generator have shifted to equipping several employees with smaller inverter generators. This is partially due to a shift to lithium ion batteries for hand tools and the need to keep them charged, along with the need to power cell phones and computers.

There is a trend toward equipping employees with personal power sources. “We talk to owners who used to have two or three 5,000-watt conventional generators,” says Pernice. “They now have up to twenty 2,000-watt inverter generators where each employee who needs one has his or her own.”

To understand the differences between conventional generators and inverter generators, you need to take a close look at how the output power is produced. With a conventional generator, a gasoline or diesel engine typically spins an attached alternator at a constant 3,600-rpm speed to produce an electrical output, typically 120/240 volts at a 60-Hz frequency. The output of the alternator is connected directly to the load. If the engine speed fluctuates, so does the frequency of the electricity produced. Therefore, the engine is set to run at a constant speed, usually 3,600 rpms, regardless of electrical load. As the load increases, the engine throttles up to maintain its set speed.

The inverter generator uses a multi-polar stator that produces single-phase AC power, which is rectified to DC and inverted to AC, producing “cleaner” 60-cycle, 120/240V output.

“An inverter generator offers essentially the same quality of electricity that you receive from your electric company,” says Pam Meyer, equipment sales manager, Subaru Industrial Power Products. “Inside an inverter generator, a rectifier converts the AC power to DC, and capacitors create a smooth and consistent sine wave. The DC power is then ‘inverted’ back into clean AC power of the desired frequency and voltage. The result is cleaner power that more closely mirrors the power produced by electric utilities than you would get from a conventional generator.”

There are several instances when an inverter generator makes sense on a jobsite, according to Eric Bernier, national product application and training specialist, Wacker Neuson. These include:

Weight is a Key Enabler

Eliminating a heavy alternator makes the inverter generator more portable. It is lighter weight with smaller packaging. “We build a multi-polar stator into the flywheel of the engine,” says Pernice. “So we eliminate the whole alternator.”

This weight savings is proportionate based on size. “The bigger you get, the less weight advantage you have,” says Pernice. “We used to produce the EX Super Quiet generator line with models ranging from 2,200- to 12,000-watt ratings. The 4,000-watt model weighed 400 lbs. The new EU7000i is 261 lbs. So you reduce an incredible amount of weight. Our old EX1000 conventional generator used to weigh 56 lbs. Our new EU2000i is about 46 lbs. So you double the power and reduce weight. That is one of the advantages that inverter technology brought to the market.”

The weight savings does come with a trade-off. “Because inverter generators are designed to be more lightweight and compact, they can’t have big, heavy fuel tanks like traditional generators,” says Meyer. “This limits fuel capacity and results in shorter runtimes of 8 to 10 hours, which is generally more than adequate for their applications.”

Fuel efficiency is another key advantage of the inverter generator since engine speed varies with load. This is more of an advantage if the load on the generator changes a lot during use. The longer the load is low during operation, the larger the gap in fuel consumption between generator types.

Varying engine speed according to the load can have major impacts on efficiency. “This reduces fuel consumption as much as 40% and results in lower exhaust emissions,” says Meyer.

“Another noise reduction feature is the inverter’s ability to run at varying output levels,” she adds. “Inverters can adjust the electrical characteristics of the power produced using microprocessors and special electronics. This means they adjust engine speed to the load at hand, substantially reducing noise in addition to minimizing fuel consumption and emissions.”

The noise reduction can be substantial. “Many conventional generators are rated at 65 to 75 dB — the same range that includes chainsaws and jet engines,” says Meyer. “Inverter generators are much quieter. Subaru’s RG3200iS and RG4300iS, for example, produce 58 and 62 dB, respectfully, at full rated output. For comparison, normal speech is rated at 60 dB and a vacuum cleaner creates 70 dB.”

Wacker Neuson further clarifies the measurable difference in sound output. “Under full rated load at 23 ft. on a concrete slab, the inverter generator sound pressure level can be 5 dB(A) quieter for open-side models and 13 dB(A) less with side panels,” says Bernier. “However, with smaller loads, the inverter sound pressure levels drop significantly (approximately 20 dB(A) lower) because the engine speed slows down, while the traditional generator always runs at full speed.”

But there are many misconceptions about the power output produced by generators equipped with AVR. “The AVR is constantly adjusting the fields and the loads to maintain the rpm of the generator at 60 cycles,” says Pernice. This provides effective power for most applications. “Any quality generator, whether it is conventional or inverter, is good,” says Pernice. “None of it is going to damage a good quality tool.” Basically, AVR-equipped generators provide suitable power quality, with inverter generators producing the best quality power.

It is important to understand the concept of “clean” vs. “dirty” power when selecting a generator. Clean power produces an even sine wave of 60 Hz when measured with an oscilloscope. Dirty power includes surges, sags, sine wave distortions, etc.

“Most small power tools, heaters and lights are not affected significantly by the condition of the supply power sine wave,” says Bernier. “However, if the tool has an electronic control module, a dirty sine wave may cause the module to turn off the tool or prevent startup altogether. The job of the tool control module (brain box) is to protect the tool from high or low supply voltage and frequency. A dirty sine wave has low and high voltage spikes on the primary sine wave that can fool a tool control module into believing voltage is high or low. For example, a fusion welder (welds PVC gas line pipes together via a heated coupling collar) is sensitive to low or high voltage spikes on a dirty sine wave.”

“Inverter generators create more than 300 sine waves per engine rotation, which makes the generators less prone to power fluctuations,” says Meyer. “This means they are preferable for sensitive electronics such as computers. The issue of noise is one that truly separates the two categories of generators.”

Technology Comes at a Price

The higher selling price of the inverter generator is due to expensive components and smaller economies of scale (smaller production volume). “However, the selling price will go lower as sales volumes grow and new technology becomes available,” says Bernie.

“If all you need is to deliver power, or to keep the power on, a traditional generator could work for you with less up-front cost,” says Meyer. “Thinking long term, it comes down to total cost of ownership. An inverter generator is more fuel efficient and less damaging for your tools, appliances and sensitive electronics, saving you money down the road.”

But you really need to consider the application. “It is a cost/benefit relationship,” says Pernice. Portability and quiet operation are key factors.

“Inverter generators are mainly available in 1,000- to 4,000-watt models, which means that their maximum output capabilities are more limited than that of conventional generators, which come in just about any size you want — from 500 to 50,000 watts,” says Meyer.

While there are inverter generators available to 7,000 watts, Meyer notes, “Quiet operation and portability are the key reasons people choose an inverter, and that combination limits maximum output possibilities.”

It is possible to scale the technology larger. “There are towable inverter generators in the 20- to 50-kW size,” says Bernier.

“As you go up in size, there is no limitation in the technology,” Pernice adds. “It is more a matter of cost. It is more efficient, but it does cost more.”

However, most inverter generators can be paired with another identically sized unit to double the output capacity. “A special cable or kit allows users to connect two generators for greater power output,” says Meyer. “The kits can be purchased from most manufacturers.”

Paralleling two generators doubles the output. “If you have two guys working and you need a larger power unit, you just parallel them together,” says Pernice. This gives you the power you need without sacrificing portability.

Currently, it’s not possible to parallel three or more inverter generators. “But with technology changing every day, chances are good it will be possible in the future,” says Meyer.

While paralleling has advantages, it does increase costs. “The user should keep in mind that maintenance time and cost also doubles, along with fuel expenses,” says Meyer. “In any case, it’s always best to consider models that offer a low total cost of ownership through durable components, such as washable air filters, to save on continually purchasing replacement parts.”