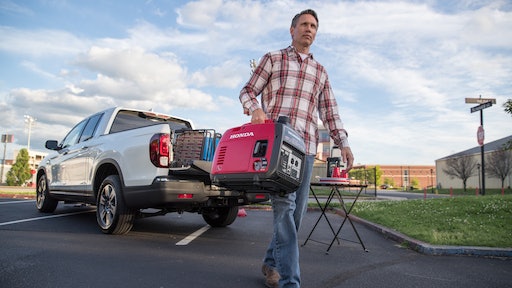 Standard portable electric generators are rather simple in operation. An internal combustion engine spins an electromagnet inside of windings of wire conductors to produce an electric current. For a conventional generator, each engine revolution produces a wave of alternating current (AC )power. To produce U.S. standard 120-volt, 60-Hz electricity, the generator needs to run at a steady-state 3,600 rpm, regardless of the load.

This is very wasteful for light load demands. The engine continues to consume fuel while running at full speed and excess noise is generated. In addition, the power produced by these conventional generators typically is not as “clean” as what you get from utility power. This can shorten the life of sensitive, microprocessor-controlled tools.

Inverter technology was developed about two decades ago. It allows engine speed to vary with electrical demand, which results in dramatic fuel savings, as well as lower noise emissions. The power produced is also clean, making it a safe power source for sensitive electronics.

“Inverter generators, such as the iQ series by Generac, use an automatic throttle control that allows the engine to speed up or slow down depending on the amount of electrical demand,” says Jeff Magedanz, marketing manager, Generac. “In comparison, a traditional generator runs at a fixed rpm, so no matter how much power is needed, it continues to run at the same speed, using more fuel and creating extra noise.”

The potential fuel savings is substantial. “We have seen savings up to 25% at low loads for units between 1,600 and 2,600 watts,” says Troy Tesmer, senior product manager for portable generators, Briggs & Stratton. “Since an inverter uses electronics to create the 60-Hz waveform, the engine is free to run at a lower speed when the load is lower, resulting in lower fuel consumption.”

Another benefit is that inverter generators are typically lighter and smaller than traditional generators. “This is because the electronics allow the design to use a permanent magnet alternator, which is constructed in such a way that eliminates the weight and size of the engine’s flywheel,” says Tesmer.

The downside of these units is their higher purchase price. The inverter generator is much more complex with additional electronic components. “You have a multi-pole alternator connected to the crankshaft of the engine vs. a conventional large alternator,” says David Bush, senior marketing strategist, general purpose engines and industrial products, Honda Power Equipment. “It is producing multi-phase AC, rectifying it to direct current (DC) and then converting it to single-phase AC. Through that process and use of a microprocessor, we are actually controlling and cleaning the sine wave. That is basically what the inverter is doing. It is varying the load and cleaning the power.”

An engine running at lower speed produces fewer emissions. “The more revolutions the engine turns, the more times the engine is firing,” notes Bush. “Every time it is firing, you are producing exhaust gases. If it is not firing much, you are not going to have exhaust emissions.”

Since it is not constantly running at high rpm, the inverter generator is also significantly quieter than a traditional generator. “Typically, we see a 6 to 10 dB reduction at rated load, depending on the generator wattage size,” says Bush.

Inverter generators use a unique method of producing power. “The noticeable difference in noise level created by an inverter generator is mostly due to a different type of alternator from standard generators,” says Magedanz. A digital inverter module converts power from DC to AC power. “The automatic throttle control allows for varying engine speeds based on electrical demand, creating a much quieter experience for the user. Additionally, an inverter generator is in a completely enclosed case, creating a sound barrier unlike the open design of a traditional model.”

The waveform produced by an inverter generator is not coupled to the engine speed. “Since an inverter uses electronics to create the 60-Hz waveform, the engine is free to run at a lower speed when the load is lower, resulting in much quieter operation,” says Tesmer. “Our Q6500 inverter, for example, is over 60% quieter than a standard generator.”

This noise reduction can help you meet noise restrictions. “Some jurisdictions have maximum sound levels for certain times of the day, which inverters help meet,” says Tesmer. But there are other regulations to consider. “Small inverters are typically constructed with a floating neutral system, are 120-volt only, and might not have ground-fault circuit interrupter (GFCI) outlets, so check your local requirements for suitability on a jobsite.

The ROI on the inverter generator is going to depend on the amount of fuel you can save. “It is a little more expensive up front, but over time you are going to be using less fuel,” says Bush. “It may take a period of time to realize that return, but that will be something that will offset the cost down the road.”

The purchase price also can be justified by the cleanliness of the power produced. “With a conventional generator, if the unit does not have voltage regulation, it’s possible to damage expensive tools, your computer, and any sensitive equipment,” Bush points out. This could easily offset the price difference between a conventional portable generator.

The way in which inverter generators produce power offers significant benefits in terms of power quality output vs. a conventional portable generator.

“Inverter generators initially create three-phase AC power that provides three alternating currents,” says Magedanz. “The digital module converts the power into DC and then inverts it back to AC to create a steady stream of clean energy. A traditional generator produces electricity at a consistent rate that needs to adjust rapidly to create enough power and supply the proper current when an appliance is plugged in. A low-quality generator may not be able to do this fast enough to avoid lag time and will ultimately damage the circuit.”

Public utilities produce AC power output in the shape of a nearly pure sine wave, while standard generators typically produce waves with some distortion. The difference between the actual waveform and a perfect sine wave is known as the Total Harmonic Distortion (THD). To be safe with sensitive micro-processor-enabled electronics, the THD should be less than 6%. This is a difficult target for a traditional portable generator.

“The closer the actual waveform is to a pure sine wave, the better,” says Tesmer. “Most standard generators have a THD of around 20%. Utility power is usually 5% or lower and inverter generators are typically 3% or better. The benefit of this is reduced heating of inductive motors and less distortion for amplifiers and power supplies. Inverter generators use solid-state electronics to digitally build a near-perfect sine wave.”

Honda touts the cleanliness of the power its inverter generator line is capable of producing. “Because Honda inverter generator models have some of the lowest levels of harmonic distortion, our sine waves are very stable,” says Bush. This prevents distortions that can shut down or damage sensitive equipment.

Currently, there are size availability limitations for inverter generators. Honda makes one of the largest models available, the EU7000is, which produces a maximum output of 7,000 watts, 120/240 volts.

There are no technical reasons that prevent the inverter generators from being scaled up larger than this, but there are economic realities. “Typically, when you get into the 10,000-, 12,000-watt and above range, you need a larger V-twin engine,” says Bush. “In this size class there are other technologies that can be economically applied to achieve clean power. and quiet operation. ”

The key is to choose the right size generator. “Generally, there are no limitations on their use. However, be sure to purchase a generator (inverter or standard) that has the surge wattage necessary to start the motors and compressors that you may use,” says Tesmer.

Portable battery-powered units are becoming popular in the homeowner and recreational markets with names like Yeti, Suaoki, Jackery and many others. Now Makinex offers a battery-powered AC power supply built for the commercial construction market to limit the use of small gasoline-powered equipment on the jobsite.

The Makinex Power Box provides silent, emissions-free power and is currently available in four sizes from 4.4 to 17.6 kW. The units can also be built to spec to match customer power requirements. The base unit weighs 420 lbs. and measures 18 in. wide x 36 in. long x 48 in. tall.

“There’s no emissions at all,” says Jeff Durgin, flooring director, Makinex. “It’s completely quiet power. You can recharge it either by plugging it into a conventional 120-volt outlet, by solar or by wind. We are working on mobile solar arrays so you can put this out in the field and never have to worry about charging it.” The Power Box can be recharged in under two hours with 120-volt utility power.

“It is the beginning of what we believe is the Green Revolution to eliminate carbon fuels in power generation,” says Durgin. “We use a very specialized battery technology.” The lithium batteries in the Power Box incorporate nickel manganese cobalt (NMC) technology, which improves the specific energy and prolongs the lifespan. This is the same technology currently used in most electric automotive vehicles.

Don’t be too concerned with battery life. “It’ll give you 10,000 cycles on battery as far as life,” says Durgin. The battery is warranted to last 10 years. This makes it less expensive to run than a gasoline-powered generator. “With a gasoline-powered engine you can spend $3,000 to $4,000 a year on fuel plus maintenance and repairs.” The Power Box requires no maintenance.

The direct current of the battery is inverted to either 120- or 240-volt single-phase power. If you are on a jobsite where you only have 110-volt utility power, you can plug the Power Box in and convert the power to 240-volt. A simple power meter on the side indicates how much power is left.

The unit comes on a four-wheel dolly with off-road wheels to transport it around the jobsite. It can be easily towed around if it is being used in a big facility.