Confidence in the equipment finance market is 57.2, a small decrease from 57.4 in November 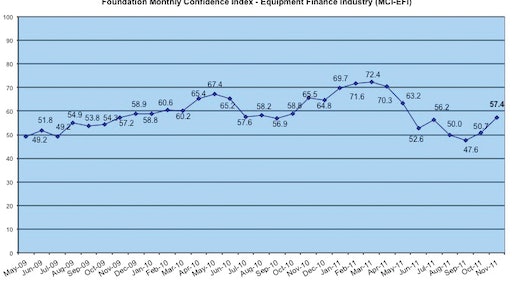 The Equipment Leasing & Finance Foundation (the Foundation) released the December 2011 Monthly Confidence Index for the Equipment Finance Industry (MCI-EFI) today. Designed to collect leadership data, the index reports a qualitative assessment of both the prevailing business conditions and expectations for the future as reported by key executives from the $628 billion equipment finance sector. Overall, confidence in the equipment finance market is 57.2, a nominal decrease from the November index of 57.4, indicating steadying optimism about business activity despite ongoing concerns about the global economic situation.

Survey results are posted on the Foundation website, http://www.leasefoundation.org/IndRsrcs/MCI/, included in the Foundation Forecast newsletter and included in press releases. Survey respondent demographics and additional information about the MCI are also available at the link above.