Contractors Getting Tougher with Equipment Dealers 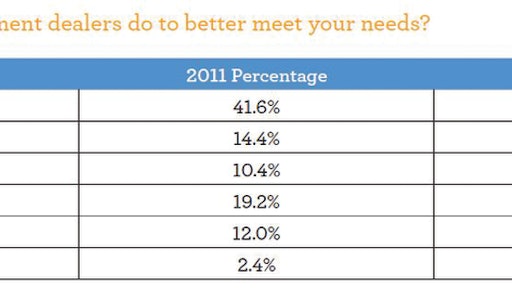 "Price" remains the most common opportunity contractors mention for improvement of dealer service. But at 36.0%, it is down from 41.6% in 2011.

On average, the 203 contractors who responded to Wells Fargo Equipment Finance's annual forecast survey said they work with 3.8 different equipment distributors, compared to an average of 3.7 in 2011 and 3.6 in 2010. These totals hint at a trend of diversification among contractors and indicate that few equipment distributors are able to meet all of a contractor’s needs or become its exclusive equipment supplier.

“Price” is once again the most common opportunity contractors mention for improvement of their dealer service. But at 36.0%, it is down from 41.6% in 2011.

Sentiment among U.S. contractors is that their purchases of new construction equipment in 2012 will remain similar to, if not down slightly, compared to the volume of equipment they purchased in 2011. The percentage of executives that said they would increase buying activity was more than off-set by the number that expect to decrease equipment acquisition.

The 135 equipment distributors responding to Wells Fargo's survey are much more optimistic about realizing increased sales of new equipment compared to 2011. Almost three out of four executives (73.3%) said they expect to increase sales, while in 2011 about 66% expected to increase sales. In the January 2010 survey, 36% of distributors said they expected to sell more new equipment in the coming year.

When asked to identify the one thing manufacturers could do better, equipment dealers have consistently selected price above all other options as a point of improvement. However, the percentage of “price” respondents dipped from 34.1% in 2010 to 30.7% in 2011 and to 26.7% in 2012. “Financing options” fell from the second spot in 2010 to the third spot in 2011 but is, once again, the second most pressing concern for 2012.