At the competition, Gearflow also won first place in its industry track and was voted the audience favorite during the event. 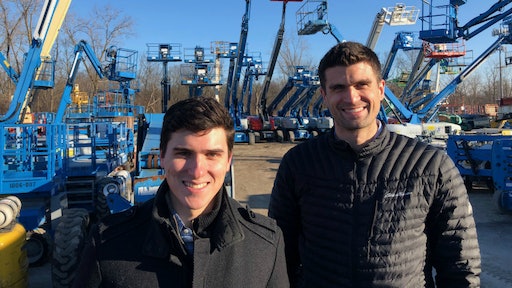 The event, which was completely virtual this year due to the COVID-19 crisis, attracted more than 650 viewers.

Ben Preston, a Kellogg MBA candidate, and Luke Powers launched the marketplace in 2018. After working at his father-in-law’s equipment rental company for six years, Powers was tasked with bringing the family business online. When he began his research, he learned how fragmented the parts industry was and how expensive it could be to build a site from scratch. Eighty percent of equipment suppliers are independent, small shops, Preston said, and most do not have the budget to construct their own e-commerce sites. Instead, these mom-and-pop shops rely on selling through Amazon or eBay, and these generic marketplaces lack branded storefronts for suppliers and group all sellers in the same place.

“So it becomes really commoditized by price because you’re selling next to everyone,” Preston said.

Unlike these competitors, Gearflow allows suppliers to create their own online store pages, building on the sales reputation they’ve developed for years offline. Users can search for parts and machinery, giving them a one-stop-shop for their equipment needs.

In its first year in business, suppliers’ overwhelming demand to get listed crashed the site. Gearflow raised $1.8 million in seed funding at the end of last year to rebuild. Now, the VentureCat cash will help the company expand even more.

At the competition, Gearflow also won first place in its industry track and was voted the audience favorite during the event, awarding the startup an extra $8,000 and $2,000, respectively.

Gearflow now lists — or is waiting to list — 12 million SKUs from 108 suppliers located across the country. By the beginning of 2021, the company aims to offer a space for equipment rental companies like Powers’ families to list. Eventually, Gearflow hopes to analyze its transactions and use the insights found to inform suppliers’ decisions around fleet, equipment, marketing, and more.

More than 50 teams applied to compete in this year’s VentureCat, with 26 making it to the semi-finals and just six finalists pitching at the event. The startups that pitched in the finals were companies that won first place in their industry tracks.

Throughout the entire program, Northwestern gave out more than $300,000 in non-dilutive prize money, up from $100,000 last year. The funds this year were primarily supplied from The Levy Institute, and Lanny and Sharon Martin. Lanny is a longtime trustee of Northwestern and earned his bachelors in 1968 and his JD from Northwestern’s School of Law in 1973.

In March, Melissa Kaufman, the executive director of The Garage at Northwestern, made the decision that the VentureCat would be hosted virtually, though she had debated having the event at all.

“Ultimately, we felt because of the pandemic, it was more important than ever to support our students, particularly those that want to walk an entrepreneurial path,” Kaufman said.