A Snorkel S3370RT provided the perfect workspace for the COVID-19 mural creation. 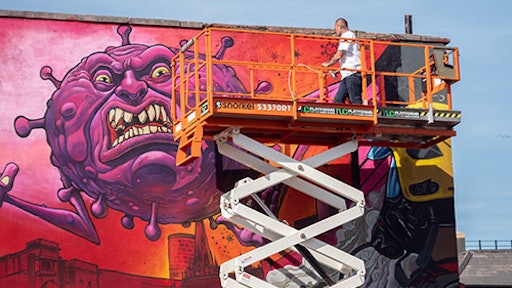 Painted from the platform of a Snorkel S3370RT compact rough terrain scissor lift, the commemorative mural was commissioned by Birmingham-based art4charity as part of fundraising efforts.

The mural serves as a centerpiece for the charity initiative, paying tribute to front-line professionals who work to combat the virus. Created by Birmingham City University Prof. Paul Cadman and Nathaniel Hanna, co-founder of Melting Pot Birmingham, the charitable collective brings together artists and creative entrepreneurs to fundraise for the Lord Mayor of Birmingham's Charity.

The charity commissioned Josh Billingham, a mixed media artist better known as Gent 48, to create the first mural in his hometown. Titled “Forward in Unity,” the imagery captures the return of community spirit during the pandemic. Using spray paint as his primary medium, Gent 48 incorporated his signature style of character based murals into the piece. 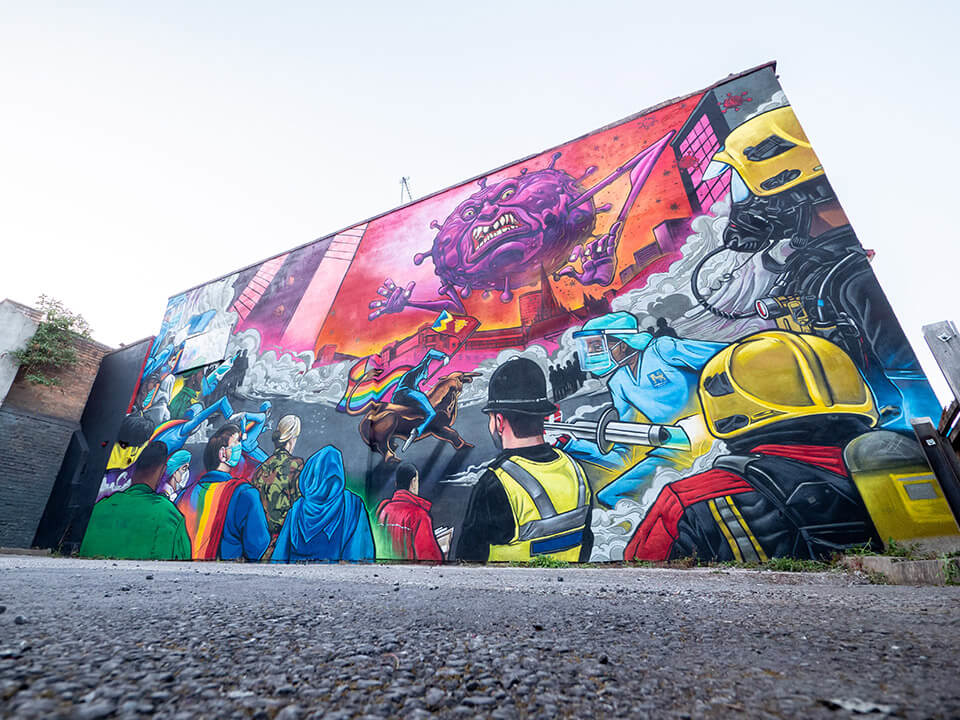 The completed mural.Edwin Ladd - Mr Ladd MediaKey workers, including the United Kingdom National Health Service (NHS), medical workers, paramedics, police, firefighters, and members of the military, are featured in the forefront. Leading the group is a bullfighter raising up the flag of Birmingham and charging toward an oversized virus. The mural also aims to represent the city of Birmingham with its skyline in the background.

To reach the full height of the wall, Gent 48 made use of a Snorkel S3370RT compact rough terrain scissor lift, supplied by TLC Platforms, a platform hire company specializing in platform and access equipment. With a maximum working height of 39 ft., the scissor lift provided a safe and stable platform with its auto-level outriggers and roll-out deck extension for added work space.

Future replicas of “Forward in Unity,” along with 10 more unique artist creations, are planned to help inspire continued fundraising efforts through art4charity. Larger prints will include the signatures of the artist, the Lord Mayor, and dignitaries from across the city. Smaller prints will incorporate printed signatures.