Equipment rental activity was significantly impacted by COVID-19-related disruptions during the second quarter, according to the Baird/RER second quarter 2020 rental equipment industry survey. 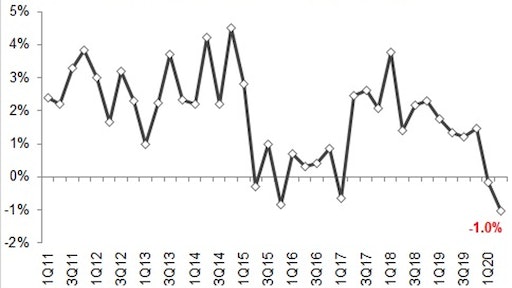 Equipment rental activity has been significantly impacted by COVID-19-related disruptions during the second quarter and, to a lesser degree, oil-and-gas headwinds, according to the Baird/RER second quarter 2020 rental equipment industry survey.

Based on qualitative commentary, revenue declines were sharpest in April, with some gradual improvement in May and June, according to respondents. Expectations for 2020 point toward lower year-over-year revenue, flattish rental rates, and a decline in year-over-year fleet spending in response to industry challenges.

Activity dropped about 20% in April because of the impacts from the pandemic and the sharp drop in oil prices.

According to respondents, average rental revenue declined 9.4% in the second quarter, compared to a 0.9% increase in the first quarter, with the initial COVID impact hitting in mid-March. Prior to the first quarter, average quarterly growth was 7.7% during the nine-year history of the survey. 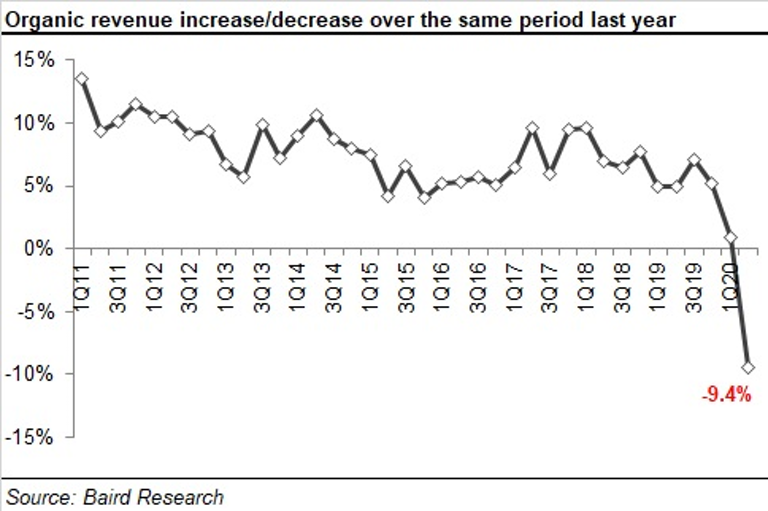 Based on the qualitative commentary, Baird analysts estimate that revenue declined about 20% in April, 13% in May, and 6% in June. Fifty-five percent of respondents expect revenue and utilization to return to pre-COVID levels in 2020, with about 32% expecting it in the third quarter. Most of the remaining respondents expect a return to pre-pandemic levels in 2021, with most predicting that to occur in the first half of the year.

Average rental revenue plunged 9.4% year-over-year in the quarter, below Q1 when it dropped 0.9% and the lowest growth in the survey’s nine-year history. Many but not all of the respondents experienced the worst disruptions in April because of shelter-in-place mandates, with revenue declines lessening as the quarter went on.

“Everything is tied to COVID-19 at the moment,” said one respondent. “Rates are low because of it, people are hesitant, jobs aren’t starting as planned.”

“Smaller contractors/homeowners are doing many smaller projects that are keeping us busy, but we miss the ‘send it out for six months’ base of business,” said another.

A third noted: “The states don’t have money to spend on road projects. We need a Federal infrastructure bill to pass.”

Some of the commentary was similar to what rental people said during the recession during the late 2000s. “Increase(d) competition and rental rates eroding. Local competitor stealing salespeople from other rental companies and take the customers by offering lower rates,” said one respondent.

The average fleet size, in terms of units, shrank 2.2% year-over-year in the second quarter compared to 3% growth the prior three quarters — the first time the average fleet size has declined in survey history. Respondents expect fleet purchases to decline 7.4% in 2020 compared to flat expectations from respondents last quarter. Respondents expect access equipment spending to plunge 15.4%, compared to the 0.1% increase predicted at the end of the first quarter. Earthmoving expenditures are expected to drop 4.2% and small iron 4.3%.

This is the official launch of IPAF's app, leading off in the UK and Ireland, with the next phase rolling out in other territories and languages in the coming months.
International Powered Access Federation (IPAF)
June 3, 2021
Follow Us