To help celebrate Earth Day (Friday, April 22nd), we’re investigating sustainable building products this month. Despite the many benefits that plastics offer, the negative impact of plastics has become a global problem. Algae may be the solution. 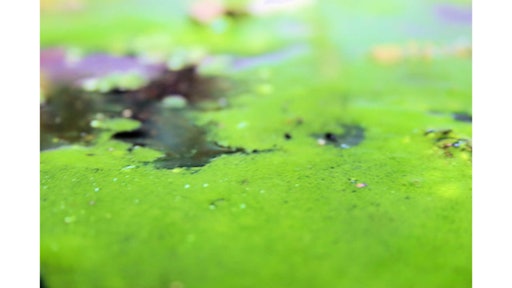 When a plastic’s usefulness is over, it is readily dumped into landfills and ocean environments. This attitude towards plastic production, consumption and waste is concerning as plastics can persist for over 2,000 years without biodegrading. With our growing global population and continued high consumption of plastic products, we are headed towards running out of space and fast.

The idea of using algae for making consumer products is not a new one. Due to their high protein contents and healthy pigment contents, algae are widely used today as a health food supplement. Since the 1980s and 1990s a number of companies have been founded around the concept of using algae for fuels and other products.

In the case of algae for bioplastics, it is the high protein content found in the biomass that makes them attractive. The high protein contents in algae (reaching as high as 65% of the dried biomass in some cases according to Algix) make them naturally capable of behaving like a polymer after exposure to heat and pressure. With a much simpler means of production, the use of algae for plastics a very economical and sustainable practice.

Algix creates bioplastics from aquatic biomass—namely, the blue-green algae spirulina and the miniscule duckweed—grown in a controlled environment containing nutrient-rich wastewater from nearby agricultural and industrial facilities.

If released into a water body, the wastewater would induce harmful algal blooms, Algix co-founder and director of research and development Ryan Hunt says. To combat this, Algix harvests, dries, and mills the algal biomass into tiny particles, and then combines it with plastic polymers to create something useful instead of wateful. The resulting bioplastics and resins can be used to make foam boards, insulation, plastic sheeting and wire coatings.

The algae reduces the amount of petrochemicals in conventional plastic by up to 70% “Algae is one of the lowest-cost options to treat that wastewater,” Hunt says. Another benefit? Growing algae also consumes carbon dioxide.

The finished product is called SOLAPLAST. The company receives algae biomass from a wide variety of sources and uses plastic extrusion technology to produce bioplastics resin pellets for use in injection molding, sheet extrusion, blown film and thermoforming product conversion techniques in both durable and biodegradable formulations.

Microalgae could also put the paving industry on the road to a greener future. At the annual American Chemical Society meeting, researcher Ted Slaghek presented his lignin-based road concept.

A lignin is a common-but-complex material that makes trees sturdy and cornstalks stand.

Microalgae lingins have long been known for their use in applications like cosmetic dyes and food supplements. They reportedly account for nearly a third of all the organic carbon in the biosphere, and yet we really haven’t had much of a use for the material. It’s often burned to generate electricity at paper mills, but burning this material is not only wasteful, but releases soot and greenhouse gasses into the atmosphere.

That's why Slaghek and his colleagues are thrilled about their success in creating a lignin-based seal for asphalt mix.

Traditionally, a by-product of crude oil production called bitumen is the main sticky ingredient in asphalt and roof sealants. However, it's no secret that oil is a limited commodity, and even the by-product of its refinement may soon disappear.

"In the long term, we have to move to renewable products that we can harvest every year," Slaghek said. "It should be logical to use natural organic raw materials instead of crude oil."

Slaghek and his team used a hydrothermal liquefaction process, i.e. pressurized water (in a subcritical state), to transform this microalgae waste into a black, viscous, hydrophobic substance (bioasphalt) that closely resembles petroleum-derived asphalt. The process currently achieves a conversion efficiency of 55%.

Read more about Algae in Asphalt.

Algae blooms have been known to impact food markets primarily in fishing and shellfish farming, they affect tourism and recreation industries, they cause human health problems, create demand for national aid in drinking water and other supplies. When harvested however, algae has a huge potential to increase global markets sustainability. So go ahead and clear out that algae in your lakes this summer. If it’s not being used for plastics or our roads, at least it’s not ruining your day on the water.

How the Construction Industry Can Honor Earth Day

Is it Possible to Grow Sustainable Building Insulation?