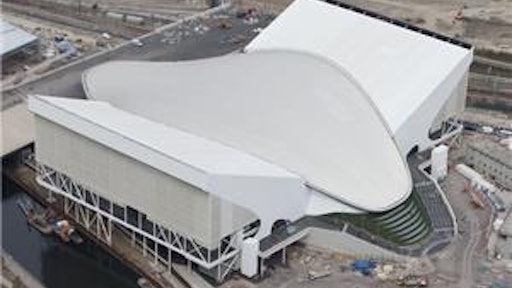 The final tile was laid in the competition pool at the London 2012 Aquatics Centre today, marking one year to go until the opening ceremony of the greenest ever Olympic Games.

The latest of the six main Olympic Park venues to be finished, the Aquatics Centre with its unique 160 metre long wave-shaped roof has been built on time and on budget and sets new standards in sustainability design, according to London 2012 organisers.

Measuring over 200 metres long with a 22,000 metre squared footprint, the centre is the second largest main venue after the Olympic Stadium, and will form the 'gateway' to the Games. It will host swimming, diving, synchronised swimming and the swimming discipline of the modern pentathlon. As well as boasting sustainable and recycled materials in its construction, a key feature of its sustainability design will be the venue's legacy. Once the Games are completed, the Aquatics Park will transform from an Olympic venue with a capacity to hold 17,500, into a 2,500 capacity venue providing two 50 metre swimming pools with moveable floors and separation booms, a diving pool and dry diving area for community and events use.

"With construction now complete on the Aquatics Centre, we are another step closer to the spectacular Olympic Park which will be host to world class sport in 2012. And after the Games, the venue will become a much-needed swimming facility for London with community use at its heart, epitomising the spirit of London's bid," said Sebastian Coe, London Organising Committee of the Olympic Games and Paralympic Games (LOCOG) chair.

The build of the Aquatics Centre features a number of key low carbon features including a striking ceiling above the pool made up of 30,000 sections of sustainably sourced Red Lauro timber.

The venue's wave-shaped roof designed by Zaha Hadid sits on a steel structure weighing over 3,000 tonnes with robust aluminium covering, half of which is recycled.

The temporary seating stands that sit either side of the Aquatics Centre roof are made of steel and phthalate-free uPVC wrap.

The 866,000 ceramic tiles installed in the pools, poolside and changing rooms, were delivered by train to the Olympic Park, helping to reduce transport emissions.

Meanwhile, the venue itself sits on a brownfield site that was once contaminated but has been cleared of pollutants including petrol, oil, tar, solvents and heavy metals such as arsenic and lead.

"The build project for London 2012 has been a huge success for the British construction industry, public sector and UK plc as a whole. The completion of the Aquatics Centre is the final permanent world-class sport venue to be finished on the Park and a proud moment for the [Olympic Delivery Authority]," said Secretary of State for Culture, Olympics, Media and Sport Jeremy Hunt.

Two of the key themes of the London 2012 sustainability plan are to tackle climate change and to deliver a 'zero waste' Games. To this end LOCOG and the Olympic Delivery Authority have committed to achieve 15 per cent carbon dioxide reductions for permanent venues beyond 2006 Building Regulations and to achieve BREEAM 'Excellent' rating for permanent venues at the Olympic Park.

They have also committed to transport 50 per cent (by weight) of construction materials to the Olympic Park by rail or water.

In a report published earlier this year, the organisers confirmed they were on track with all three of these areas. However, a commitment to deliver 20 per cent of all energy demands for the immediate post-Games legacy using on-site renewable sources has not been achieved.

The Aquatics Centre will open this summer for test events ahead of the Games.