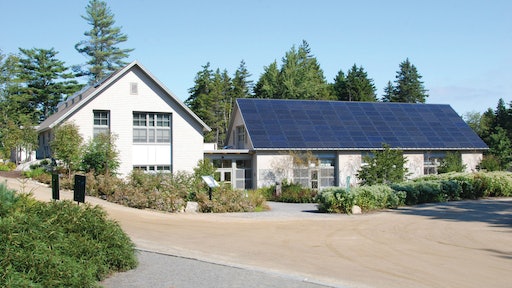 The Coastal Maine Botanical Gardens Bosarge Family Education Center produces almost 30% more energy than it is uses with 135 photovoltaic panels mounted on the south-facing roof, and an additional 102-panel array in a nearby field.

The foot-thick walls, packed with more insulation than most roofs, will hold in the heat. The 237 solar-electric panels will feed power to the grid on sunny days. The 1,700-gallon cistern will collect rainwater to help flush toilets.

Those and other features make the new Bosarge Family Education Center at the Coastal Maine Botanical Gardens in Boothbay "the greenest building in Maine," say the project's designers. The 8,000-square-foot center is the state's first commercial building designed to produce more power annually than it uses and zero carbon emissions annually -- a so-called net-zero energy project.

The public will get a chance to experience the $4.2 million building and its displays of native landscaping on Friday, at a grand opening at 11 a.m. The ceremony will begin a weekend of events, including a concert and children's activities.

The new center highlights the remarkable growth of Coastal Maine Botanical Gardens, which opened in 2007, on 128 acres of forest and tidal frontage. About 40,000 visitors came the first year.

Since then it has expanded to 248 acres, becoming the largest botanical garden in New England and one of Maine's top tourist attractions. It's on track this year to host more than 90,000 visitors.

Rapid growth has come in part from the gardens' ability to attract wealthy, community-minded donors, who made it possible to open the Lerner Garden of the Five Senses in 2009 and the Bibby and Harold Alfond Children's Garden in 2010.

For the education center, the gardens benefited from a $2 million gift from the Bosarge Family Foundation and Ed and Marie Bosarge of Houston, who have a summer home in Southport.

The new center was designed to meet the U.S. Green Building Council's LEED Platinum designation, incorporating the highest levels of energy-saving and environmental features. The only other commercial, LEED Platinum building in Maine is the Hannaford supermarket in Augusta.

Because the center is a public building, it has been designed to share its features with visitors. Dozens of illustrative interpretive panels and an electronic dashboard show people how the building is performing, in terms of energy and water use.

"It furthers our mission of sustainability," said Barbara Freeman, a spokeswoman for the gardens. "It sets an example. It's a building people can learn from."

The center is the product of an integrated-design approach that involved collaboration among several professionals, including some Portland firms. They include Scott Simons Architects, Fore Solutions and Allied Engineering.

Other key companies were Bensonwood of Walpole, N.H., Maclay Architects of Waitsfield, Vt., and Energy Balance of Montpelier, Vt.

After a year of operation, an analysis of the property's performance has confirmed that the Center is producing almost 30% more energy than it is using. One hundred and thirty-five photovoltaic panels are mounted on the south-facing roof, and an additional 102-panel array is located in an open field nearby. Altogether this solar installation generated 55,184 kWh last year. Payback for the solar system is estimated at 10 years.

The walls achieve an efficiency rating of R-40 and the roof is R-60. Triple-glazed windows, among the most efficient windows that can be bought in the U.S., allow for passive solar gain in the winter, while keeping out summer heat. A recent energy audit of air leakage concluded that air infiltration at the facility is by far the lowest in the state.

Calling the project "Maine's greenest building" has a double meaning at a botanical garden, Charette noted. But overall, the project offers an exciting way to demonstrate the latest energy and environmental construction techniques in Maine.

"It's using a building as a teaching tool," she said. "This building has the opportunity to touch a lot of people."