Nationwide poll found that 79% of Republicans and 89% of Democrats support the use of LEED in buildings. 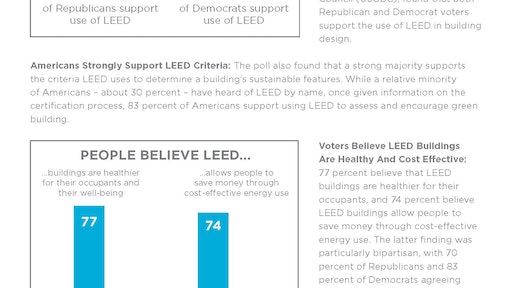 The U.S. Green Building Council’s (USGBC) LEED green building rating system has strong bipartisan support across the US, according to a new poll released today. The nationwide poll found that 79 percent of Republicans and 89 percent of Democrats support the use of LEED in buildings.

The poll also found that a strong majority supports the criteria LEED uses to determine a building’s sustainability, including saving money through energy and water efficiency and creating jobs.

“Americans on both sides of the aisle strongly support the increased efficiency and cost savings that result from implementing LEED,” said Rick Fedrizzi, CEO & founding chair, USGBC. “This poll highlights the great public demand for the continued use of green building standards to cut costs, improve human health and reduce impacts on the environment.”

The poll also found that 77 percent of voters believe that LEED buildings are healthier for the people who live, work, learn and play in them, and 74 percent believe LEED buildings can save people money through cost-effective energy and water use. The latter finding was particularly bipartisan, with 70 percent of Republicans and 83 percent of Democrats agreeing with LEED’s cost-savings benefits.

Voters from both parties generally favor green building and that support increases when they learn about LEED’s job creation and cost-savings potential.

Echelon Insights conducted the nationwide poll on behalf of USGBC from Feb. 2-6, 2015, surveying 800 registered voters on both landline and cellular telephones. The survey was weighted by age, gender and race to be a representative sample of voters nationwide. The margin of error is +/- 3.5.

Infographic: How LEED is Changing the Face of US Construction