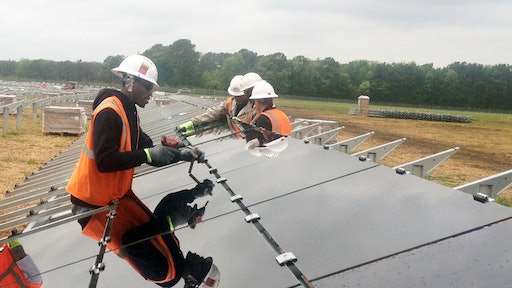 Located on Penny Branch Road in Warsaw, Duplin County, the 65-megawatt solar facility will cover 500 acres and have about 850,000 solar panels. It is the largest solar facility under construction in North Carolina.

Additional workers are arriving and construction activities are ramping up at three Duke Energy solar facilities – part of the company’s $500 million commitment to solar energy in North Carolina.

The previously announced facilities in Bladen, Duplin and Wilson counties are expected to be in service by the end of the year.

At the peak of construction around mid-year, more than 900 workers are expected to be at the three sites. Once completed, the three facilities will have a total capacity of 128 megawatts.

The Duke Energy-owned facilities are part of the company's continued expansion of renewable energy in North Carolina, including a 13-megawatt solar facility to be built at Marine Corps Base Camp Lejeune in Onslow County. The company is also partnering with solar developers to purchase the electricity output from large solar facilities planned in the state.

Turning a building into a solar honeycomb

Dow has installed their recycled plastic-modified asphalt mixtures on several roads and parking lots in the country, proving these mixtures to be a viable option in sustainable pavement design and construction
Jessica Lombardo
November 2, 2020
Follow Us