‘As the year progresses, increasing supply due to increasing new truck sales, along with a softening demand will likely slow price appreciation’ ACT Research 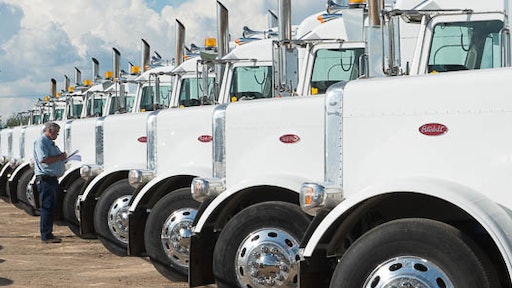 Auction and retail used-truck markets show year-over-year increases of 41% and 23%, respectively, but the wholesale channel was down 18% compared to June 2017
Ritchie Bros.

While the average price of used Class 8 trucks was flat in June compared to the previous month, they have risen 15% over last year, according to ACT Research.

Same-dealer used trucks sales volumes were also up 13% year-over-year which tracks with the positive reports on used truck sales that ACT found when talking to dealers.

“Dealers are reporting that used truck sales are very strong, which is good news for dealers, OEMs, finance companies, and truckers trading for new trucks,” said Steve Tam, vice president at ACT Research. “As the year progresses, an increasing supply, due to increasing new truck sales, along with a softening in demand will likely lead to slowing price appreciation.”

Ford will reveal the Lightning at its world headquarters in Dearborn, MI on May 19th for everyone to view live.
Curt Bennink
May 10, 2021
Follow Us