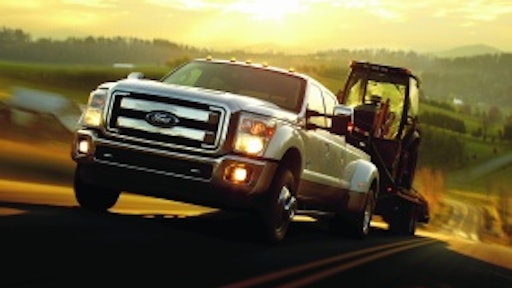 Often overlooked, optional gear ratios play a key role in pickup truck performance. If the axle ratio is too tall, the truck may seem to lack power, especially when climbing hills. This may be corrected with a numerically higher axle ratio, often at the expense of unladen highway fuel economy.

Video: How a Differential Works

But selecting the best gear ratio can be tricky. Every engine includes a sweet spot in its power curve between peak power and peak torque. You want the transmission gearing and axle gear ratio to stay in this sweet spot while hauling the payload at the desired speed.

Also consider that the axle ratio is only a portion of the overall pickup gearing. Manufacturers spend a lot of effort on powertrain matching. "Powertrain matching is really a systems approach," says Dennis Slevin, vehicle engineering manager, Ford Commercial Vehicles. "It is the engine, transmission, axles and tires working together. It is the effective ratio of engine power transmitted all of the way through the drive system to the ground."

He adds, "From our perspective there are interconnected reasons to choose optional axle ratios -- if you are hauling heavy loads with large trailers in hilly terrain, and you do a high frequency of towing." Consider a PowerStroke 6.7-liter diesel that offers a choice of a 3.31, 3.55, 3.73 or 4.30 axle ratio. "The 3.31 might be capable of towing the trailer. But if you are towing the majority of the time, you probably want the 3.55 because it will tow better and provide better fuel economy loaded."

Start with the total combined weight of the vehicle. Then consider the environment.

"If you drive the vehicle on flat ground in Iowa throughout its life, axle ratio is not as critical as pulling the same load up the hills in Denver," comments Greg Martuch, vehicle development engineer, General Motors. "The axle ratio really starts to show when you get into grades."

Note that pickup tow and haul ratings are listed by axle ratio. "The vehicle's tow rating vs. what the customer plans on towing is the best way to determine which gear ratio you should select," says David Williams, truck marketing manager, Toyota.

"The consumer can tailor the vehicle's driveline to meet their particular needs," he notes. "If you will never have more than 1,000 lbs. in the back of the truck, you would want the highest ratio (3.73 instead of 4.30) for improved fuel economy because you will not need the torque. However, if you are towing a 9,000-lb. trailer, you will need that extra torque to get the trailer moving, especially up steep grades (4.30 instead of a 3.73)."

Fuel economy (higher rpms translate to increased fuel use), the weight to be towed or hauled (you want the engine to stay at an efficient speed on hills), roads traveled (steep grades vs. flat highway) and expected speed are all factors to consider when choosing the correct ratio, says Nick Cappa, engineering and technology PR, Chrysler Group. "It really depends on the rpm at which you want to drive," he adds. "You may choose a ratio that keeps the engine at the lowest rpm for fuel economy. But if you are not traveling fast enough on the highway, it will lug the engine and prove to be less efficient. You want to keep the engine at the most efficient rpm for a set speed, no matter what the load."

Cappa advises, "Consider the top speed at which you want to drive, the fuel economy you wish to achieve at that highway speed and the load you intend to tow or haul. For example, if you wish to tow 10,000 lbs. at 55 mph on flat highway, a mid gear ratio will keep the engine rpms up enough to maintain power with efficiency. If you want to drive at a high rate of speed, go with a smaller numerical gear ratio to keep the rpms as low as possible."

"Towing a heavy load and fuel economy don't go hand in hand," says Williams. "The lower gear ratio will give you the driveability you need to effectively tow the load at the expense of slightly higher engine rpm at higher speeds vs. a vehicle with a higher ratio. However, if you use a final drive ratio that is too high, you will have to rev the engine more and the transmission clutches will generate much more heat due to slipping when trying to get the load moving. The end result is you damage your transmission."

The weight of the load isn't the only consideration. "It is the weight of the load, as well as the aero characteristics of the load," says Martuch. "If you pull a large trailer that has a large frontal area, it has a very high aero impact going down the highway compared to a flatbed trailer with a Bobcat and lawn servicing equipment. The aero characteristics are quite different for those two vehicles, and that has a huge impact on towing on the highways."

Performance Relative to Use

General Motors has done extensive testing with its L96 gas engine and both the standard 3.73 and optional 4.10 axle ratios.

"At first glance, you think a 3.73 isn't going to do that much for you vs. a 4.10," says Martuch. "It really comes down to what gear selection you have pulling that grade. That 3.73 vs. a 4.10 has a huge impact on engine rpm because you are selecting second gear with a 3.73 to pull the grade, but you can hit third gear with a 4.10. Your engine speed is down about 1,000 rpm lower, so temperatures under hood are going to be significantly lower."

General Motors compares its L96 gas engine paired with a 3.73 or 4.10 axle ratio. "If you look at your base vehicle at curb or lightly loaded, and you go from a 3.73 to a 4.10 final drive ratio, you will see a .2- to .3-mpg reduction on the highway at highway speeds during normal driving (unloaded)," says Martuch. "Hook a large trailer to it and start pulling grades, and you are going to see a .3- or even a .5- mpg reduction in fuel economy with a 3.73 because you are running so much higher rpms pulling the grades."

Ford offers its 6.2-liter gasoline engine with a 3.73 or a 4.30 axle ratio. "[For] anyone who will tow or do something with a heavy load the majority of the time, we have noticed that with a 10,000-lb. trailer, the fuel economy is significantly better -- in the mile-plus range -- when towing with the 4.30," states Tim Ogilvie, fuel economy engineer.

"The physics behind that is, with the 4.30 axle ratio, you're in sixth gear more of the time," Slevin explains. "With the lower numerical ratio, you are more likely to be in fifth or fourth."

Many dedicated commercial trucks do not offer a choice of axle ratios. For example, the Ford F-450 and F-350 DRW pickups only come with one gear ratio. "We have the one ratio because we suspect those trucks are primarily being used for a commercial-type application where they are all heavily loaded," says Slevin.

Changing tire size also affects the gear ratio. "A larger tire plays the same role as smaller gear ratios. However, you now may be adding rotating mass, which decreases efficiency and also negatively changes the dynamics of the vehicle for which it was designed," notes Cappa.

"Keep in mind that vehicles are designed to be operated with a specific-sized tire. We don't recommend changing tire size, as this will affect handling and performance of the vehicle," says Williams -- unless the manufacturer specifies optional tire sizes.

Impact on Wear and Tear

"Energy must be transferred somewhere," says Cappa. "The wear and tear will increase in one area and drop in another depending upon what the load is and the drive cycle." Most wear and tear is dependent upon driving habits, e.g., slipping the clutch, jack-rabbit starts, over- and/or under-revving the engine, etc.

But a higher numerical ratio will save wear on both the engine and transmission. "It is more of a benefit to the transmission because it will have a greater mechanical advantage over the load when trying to get the load moving," says Williams.

The recent proliferation of six-speed transmissions makes the overall gearing more effective. "Multiple speeds give multiple options to keep the engine in the most efficient operating range at a particular speed," says Cappa.

"The benefit of the six-speed transmission is a low first gear to get you moving and the sixth gear once you are up to speed to improve fuel economy," says Williams. "Our six-speed transmission has a wide spread of gears that does allow for a lower final drive ratio to get heavy loads moving, while providing two overdrive gears at the top to compensate for the low axle ratio and provide good fuel economy, too."

It's all about balance. Take General Motors' standard axle ratio for its heavy-duty pickups. "We select a 3.73 because we know the customer of a heavy-duty truck is going to tow, but he isn't going to tow a 20,000-lb. combined package," says Martuch. "So we try to give him the best performance with a 3.73. Then we have the customer that has the 3500 dually. It is the small 17-in. tire and the 4.10 axle ratio. That will give him the best performance for his 20,500-lb. combined package."

The best advice is to fully understand your application. "The axle selection also impacts many factors other than fuel economy," says Martuch. "That axle ratio is key to thermal performance. If you are going to tow a lot of weight, the higher numerical gear ratio will actually improve the durability of the vehicle."