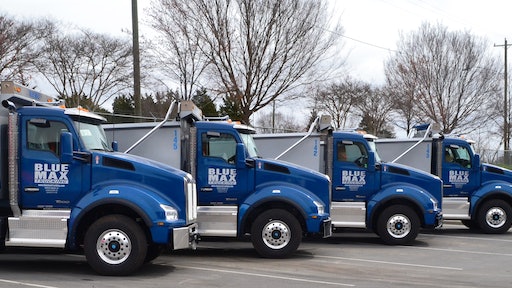 Blue Max Trucking delivers aggregate, equipment, precast concrete and building supplies for construction projects such as airport runway additions, highway widening projects and stadiums. The company, which runs 275 power units, operates from its corporate headquarters in Charlotte, NC, and from facilities in the Charleston and Myrtle Beach, SC, areas.

Since the beginning of 2014, Denton Williams, president, Blue Max Trucking, has been aggressive in buying more trucks. As 2014 began, it was apparent that local businesses and contractors were set to ramp up commercial and public construction projects. As a result, the company required additional capacity to respond to customers’ need for more materials and equipment.

Williams considered several truck model options, but eventually chose Kenworth’s T880 heavy haul vocational truck after driving it at a customer event in Phoenix. “We wanted a truck that offered drivers a comfortable work environment and could lower our fuel bills,” he comments. “We also wanted a truck that would reflect well on our company’s image and would be supported by a network of reliable dealerships.

“I was impressed by the visibility and the handling of the truck,” Williams adds. “The T880’s interior is so quiet and the ride is very smooth.”

Williams decided to purchase 42 of the T880s, taking delivery starting in April 2014. Of these, 38 were equipped with dump bodies and 380-hp PACCAR MX-13 engines providing 1,450 lbs.-ft. of torque driven through Allison 4500 RDS six-speed automatic transmissions. The remaining four T880s are tractors equipped with 455-hp PACCAR MX-13 engines and 10-speed Eaton UltraShift Plus transmissions.

According to Williams, the new trucks succeeded in providing drivers with a comfortable work environment, while also contributing to the company’s bottom line with an improvement in fuel economy over the older trucks the company runs.

The investment is also paying off in both driver productivity and customer satisfaction. “When drivers are given equipment they want to operate, it shows up in the work they do and the impressions they make on our customers,” Williams states. “A truck like the T880 enhances our company’s image, which is also important to our customers because they want their equipment and supplies to be hauled in trucks that look like they’re operated by trucking companies that care.”

In addition, Williams sees the new vehicles as a useful tool for driver recruitment efforts. “Having attractive and comfortable trucks makes a big difference in attracting and retaining good drivers,” he comments.

The reliability of the vehicles and round-the-clock parts and service support from local dealer MHC Kenworth also played critical roles in Blue Max Trucking’s decision to order the T880s, says Williams. Blue Max must often meet tight delivery windows. Late deliveries can ripple through a project and result in a domino effect of other delays.

“Our customers expect us to make our deliveries on schedule,” Williams says. “Missed deliveries can cost us a lot of money and more importantly, our reputation. The Kenworth T880 and the dealer support we get from MHC Kenworth provide us the solution to stay on schedule.”

Williams already plans to add another 33 T880s to the fleet.