The 49X was designed from the ground up to meet the most demanding vocational applications. 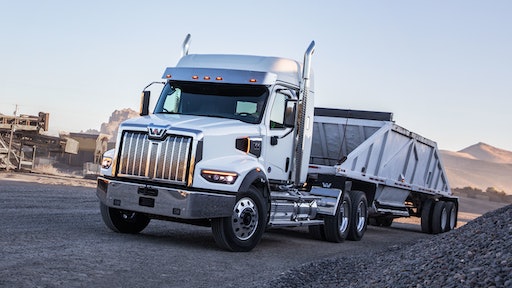 The Western Star 49X features a stronger, lighter chassis that is equipped with the company’s new X-series cab. It enables a total weight savings of over 350 lbs. in like-for-like spec’ing versus the current Western Star 4900.
Daimler Trucks North America

It’s fairly rare to witness a completely new truck in the Class 8 market, especially one dedicated to the vocational segment. That is precisely why it took many by surprise when Western Star teased dealers with a prototype in February.

“This is the culmination of nearly six years of work engaging thousands of people within Daimler Trucks North America on this project,” says David Carson, the company’s senior vice president, vocational segment. “We believe that we’re launching the best tool in the vocational space — the most tested, safest, most advanced vocational truck.”

The Western Star 49X is designed to deliver maximum versatility in a purpose-built package. It features a stronger, lighter chassis that is equipped with the company’s new X-series cab. It enables a total weight savings of over 350 lbs. in like-for-like spec’ing vs. the current Western Star 4900, which is currently slated to remain in production.

The weight savings starts with a new vocational frame. Single-channel frame rail options are available in a variety of thicknesses and feature ratings up to 3.7 million RBMs (Resisting Bending Moments). This yields greater durability and significant weight savings for greater capability and payload.

“The beauty of that single frame rail is obviously you can save a lot of weight without sacrificing the RBM, the resistance to bending,” says Samantha Parlier, vice president of vocational market development.

For customers that need maximum frame strength, frame inserts are available. “One thing that is unique about Western Star inserts is we do seal them,” says Parlier. Vocational trucks can accumulate magnesium chloride, mud or even water between the rails. “Our rails are actually sealed so that doesn’t happen.”

C-channel frame reinforcements are available with RBMs up to 5.4 million. Multiple parent rail front frame extension options are available for applications requiring front-mounted equipment, such as a plow.

The 49X will also accommodate a full array of rear suspension options. “Pretty much if you have heard of it in the vocational market, we’re offering it on this new product,” says Parlier. 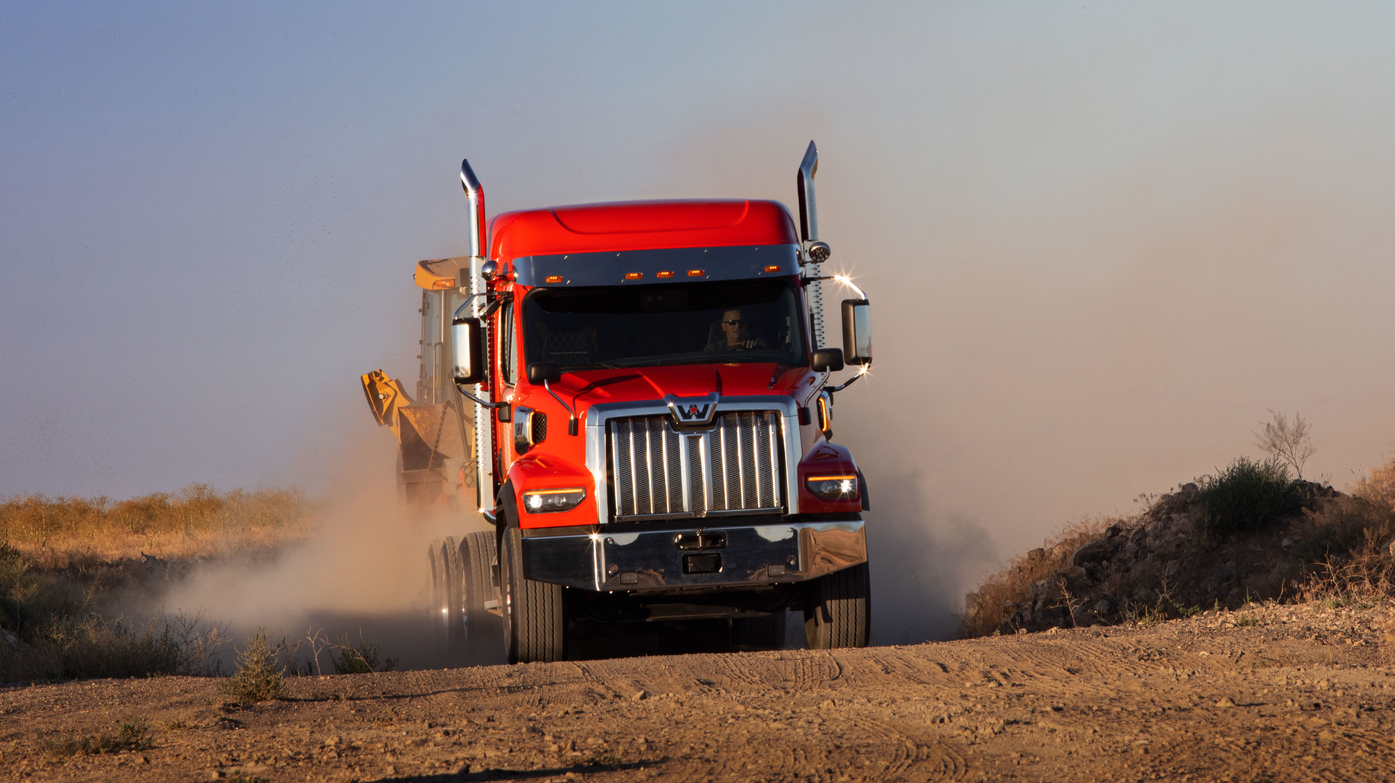 The new hood uses a patented ISO Tech Hood Suspension system that behaves similarly to a typical coil-over shock suspension system with spring and damper. The system isolates, absorbs and dissipates vibrations from the chassis when driving over uneven terrain to protect the hood from damage and cracking.Daimler Trucks North America

Western Star designed a new purpose-built cab for the 49X. “If we’re going to change the cab in terms of comfort, quietness and safety, it really requires us to transition from what we have been doing into new and more creative ways to provide that comfort for the operator,” says Carson.

“We use topology optimization, which is software technology,” explains Parlier. “We were able to take an aluminum cab and strategically reinforce it with steel to make it as tough, if not tougher, than the current cab. It was an engineering exercise. The cab is an area where we really pulled out all of the tools in the toolbox and centered that topology optimization around how exactly we create an exoskeleton to keep operators safe.” 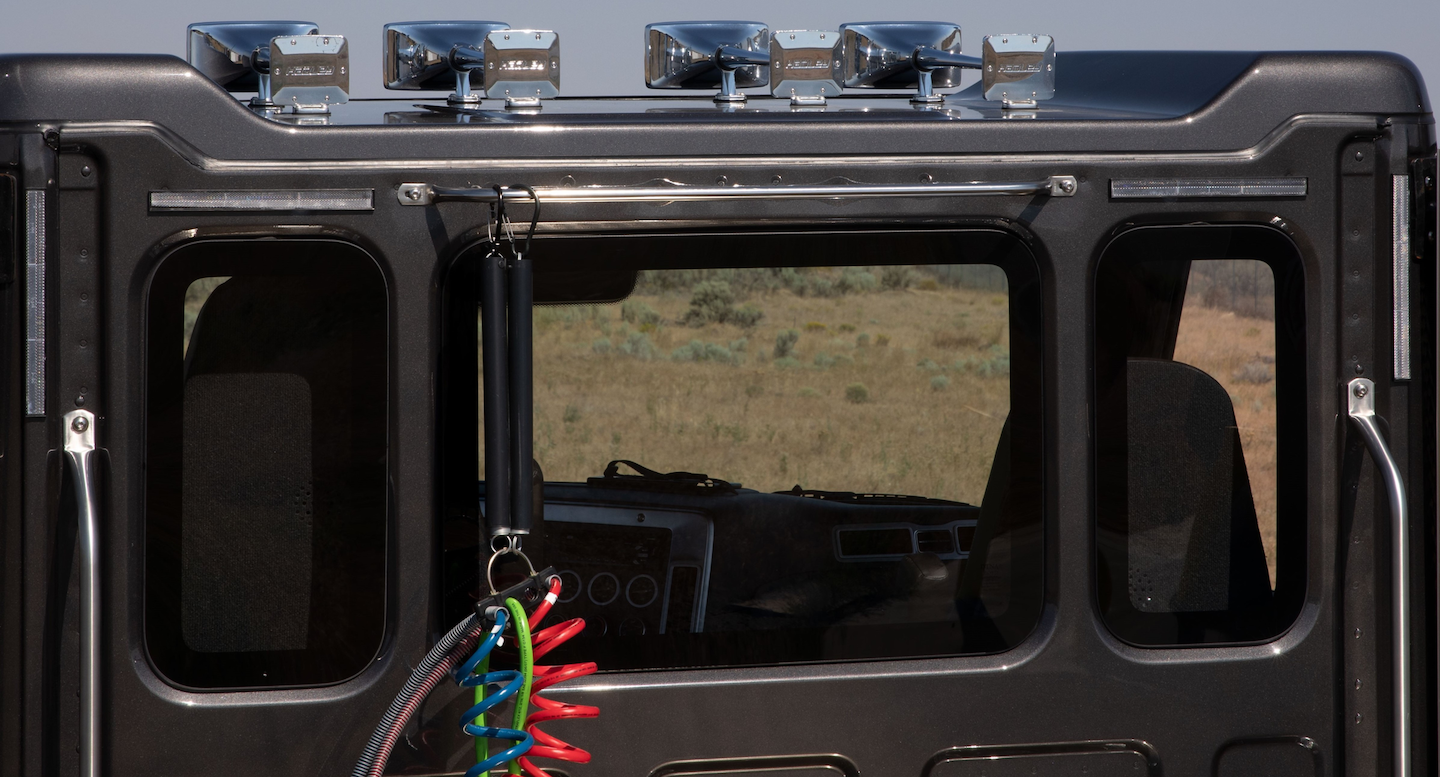 The optional three-piece rear window is 77 percent larger than the Western Star 4900.Daimler Trucks North AmericaWestern Star claims the X-series cab is the largest in the segment with 10% to 13% greater space than competitive cabs. It was designed specifically for vocational applications and provides additional vehicle weight savings while delivering long-term durability and operator comfort. Advanced topology was utilized to ensure rigidity and strength and determine where more material was needed in the steel-reinforced aluminum cab.

Development work on the cab was the most extensive in the company’s history and included multiple cab crush tests to ensure cab integrity in case of a rollover. Full-vehicle shaker tests replicated 800,000 miles of use to test the cab mount system, which uses vocational cab isolators mounted outboard for optimal stability and reduced fatigue to both the operator and the cab.

The hood of the 49X is constructed of high-strength, lightweight, molded composite for impact resistance and durability. The new hood uses a patented ISO Tech Hood Suspension system that behaves similarly to a typical coil-over shock suspension system with spring and damper. The system isolates, absorbs and dissipates vibrations from the chassis when driving over uneven terrain to protect the hood from damage and cracking.

The ISO Tech Hood Suspension is a first for the vocational truck industry. “You’ve never seen a hood in a vocational market that has a suspension system,” says Parlier. “As the frame moves, it completely isolates the hood from the frame in terms of force and inputs.” This allows a weight reduction. “We didn’t need all of those reinforcements in the mounting area and stress points that you typically see because we have the suspension protecting the hood.”

An unexpected benefit is reduced driver fatigue. “When driving the truck, you see a lot less movement at the corners of the cab, which is right by the dash,” says Parlier. “So, their brains aren’t trying to figure out what’s going on. You end up with drivers that are happier at the end of the day and more energized.”

The Detroit DT12 transmission has been redesigned for vocational applications.

“It was about a $100 million investment in creating a vocational transmission,” says Carson. “It has been tested for over 35 million global miles. They are new transmissions in the same family of the DT12, but it’s not simply just a modified transmission.” 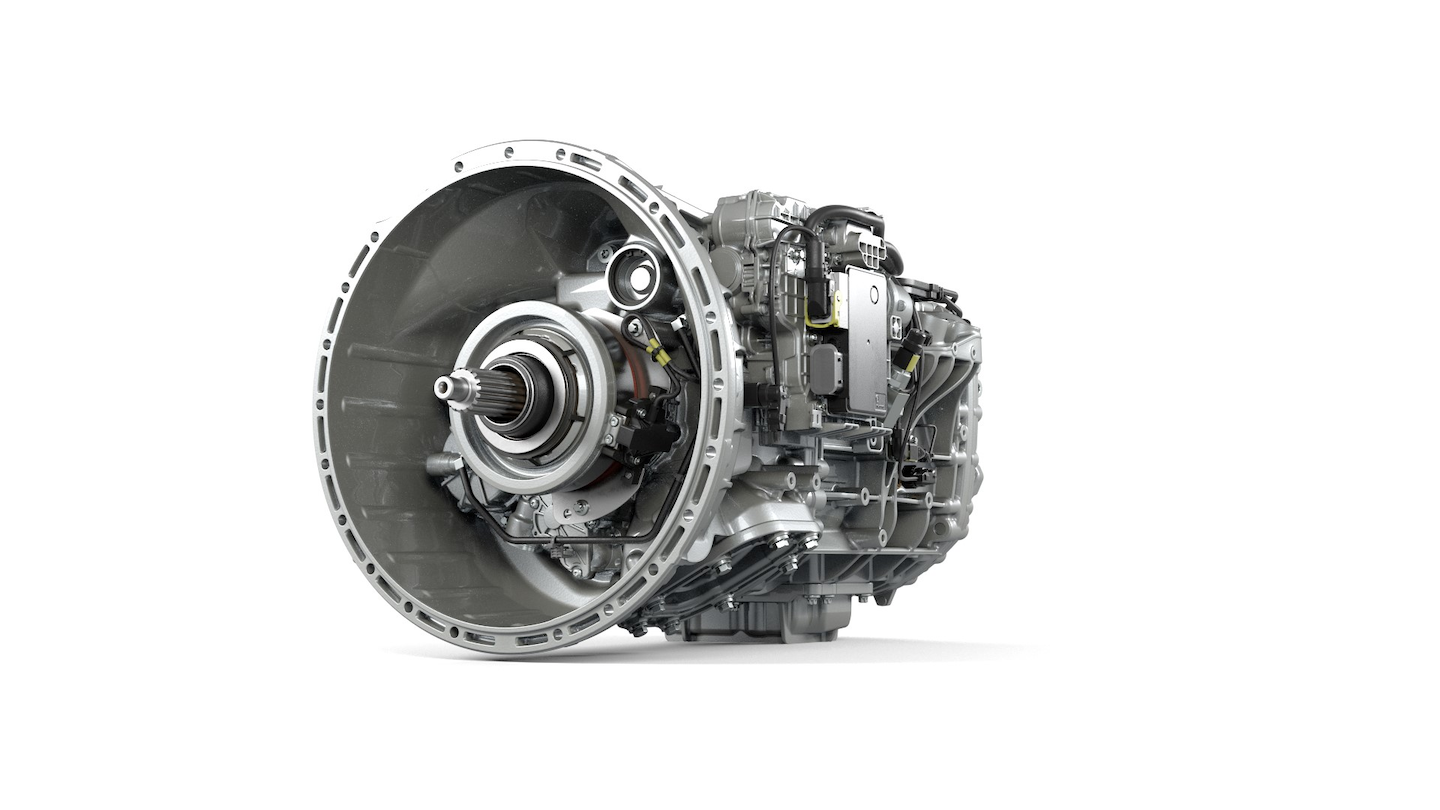 Unique work application modes and shift map strategies are available for all types of terrain. A Rock-Free Mode allows the 49X to free itself from wheel stuck situations. An Off-Road Mode enables smooth driving on extreme terrain such as logging roads and rock quarries. Power Launch provides powerful takeoffs while protecting the clutch and driveline.

The transmission also offers a neutral feature for paving applications that allows the truck to be pushed by the paver. “You don’t have to stop,” says Parlier. “You can just drive away.”

For customers who already have a powertrain preference, there are other options. “We still provide choices,” notes Parlier. 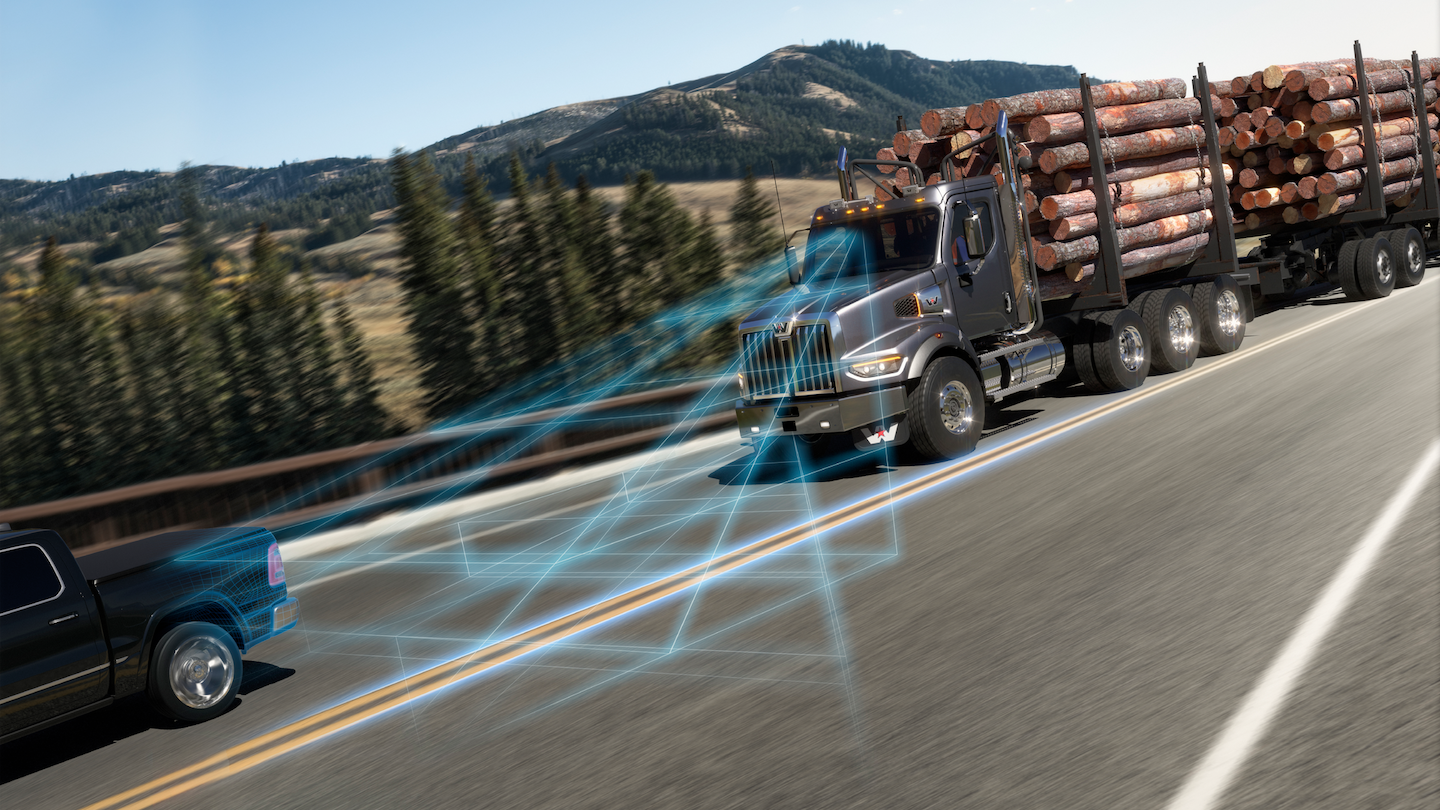 ABA5 detects distance and speed to moving and stationary objects in the driving path of the 49X and determines if warning or automated braking is necessary. The system works down to 5 mph, making it ideal for busy jobsites and in congested urban areas.Daimler Trucks North America 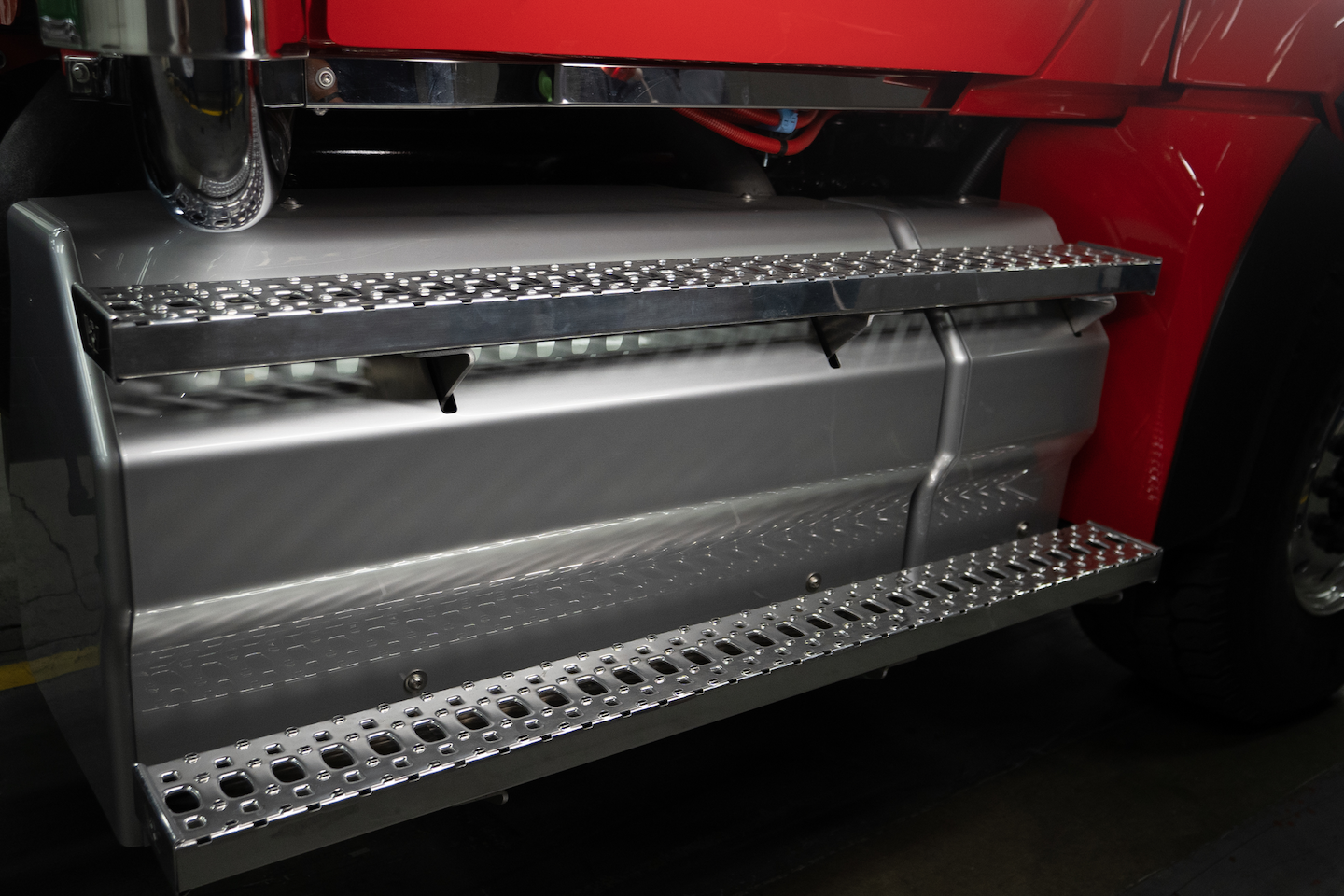 Western Star spent a lot of effort on optimizing ingress/egress, including the design of the tread plate pattern to make the process as safe as possible.With optional SGA, radar technology detects moving objects and pedestrians on the passenger side of the 49X that may otherwise fall in the operator’s blind spot and alerts them with both auditory and visual warnings for safety on the jobsite or on the way there.

ABA5 detects distance and speed to moving and stationary objects in the driving path of the 49X and determines if warning or automated braking is necessary. The system works down to 5 mph, making it optimal for busy jobsites and in congested urban areas. It also recognizes moving pedestrians who are crossing in the truck’s path, alerting and applying the brakes if the operator does not react.

Slips, trips and falls rank second among the most common types of workplace injuries. In certain applications, such as concrete ready-mix trucks, the operator may enter and exit the cab up to 50 times during a shift. In these applications, ingress and egress are real concerns.

“The real stars of every jobsite are the men and women working at it, which is why the Western Star 49X was engineered to deliver best-in-class safety with easier entry and exit to reduce workplace injury, and best-in-class visibility to benefit not only the operator but the entire crew,” Carson states.

Door opening angles of 70˚, five hand holds and step treads widened by half an inch and constructed as a staircase help facilitate safer entry and exit from the cab. The steps start closer to the ground and use a volcano tread for confident footholds with high traction, added toe clearance and mud, dirt and debris pass through.

Enhanced visibility comes from a sloped hood enabled by splayed frame rails; a lowered engine position and underhood engine air filtration; a 28% larger, single-piece, roped-in windshield; and a rear window that is 77% larger vs. the 4900. Optional Borofloat glass in the front windshield and optional poly carbonate in the rear windows provide impact resistance from debris.

The mirrors have also been improved to increase visibility in demanding applications. A C-bar mirror system features door-mounted mirrors that mitigate the effects of chassis and engine vibration to keep them stable and usable in off-road or paving applications where visibility by the operator to the crew at the back of the truck is critical.

A dual-stage LED headlight system features an internally printed heat grid and ambient air temperature sensor that can melt 3mm of ice in less than 10 minutes at -40˚ F or burn through condensation in warm, humid environments. Combined with a 45˚ light pattern, the headlight system provides smooth, uniform illumination to improve visibility and safety.

In all models, a wrap-around dash puts the driver command center and b-panel in the operator’s line of sight. On the b-panel, a flex panel houses tablet prep or can be configured for an additional 12 switches or 10 gauges. Along with QuickFit Dash Access designed for seamless telematics or other device integration, equipment control and device access is placed within easy reach for the operator. 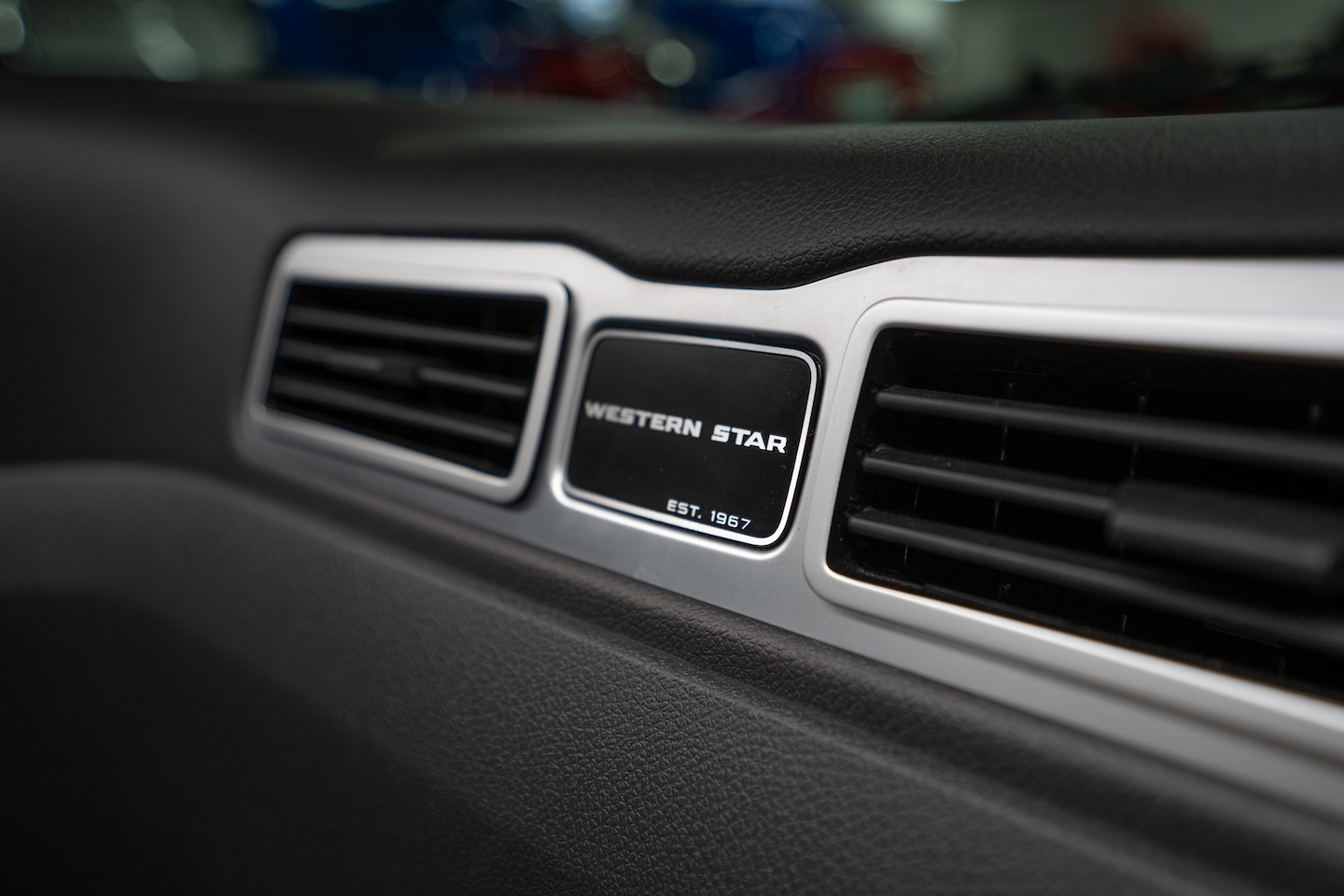 Much attention has been spent on even the most minute details. “Our bottom-line intent was to deliver a truck that benefits our customers’ bottom lines,” says Carson. “We know the conditions our customers are working in. We know the challenges of their operations and we know that productivity at the site matters most. That’s why the all-new 49X is purpose built for durability, safety and maximum uptime — and for our customers.”

The 49X is available for ordering this winter and first deliveries begin in early 2021.