The Chevrolet Silverado 2500 is set up to simplify the trailer towing experience. 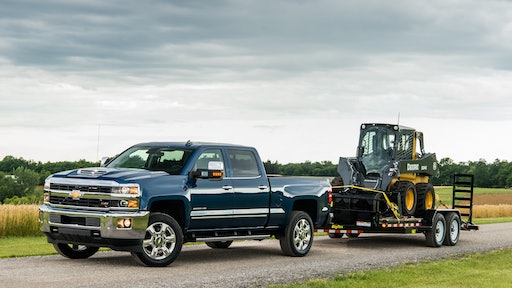 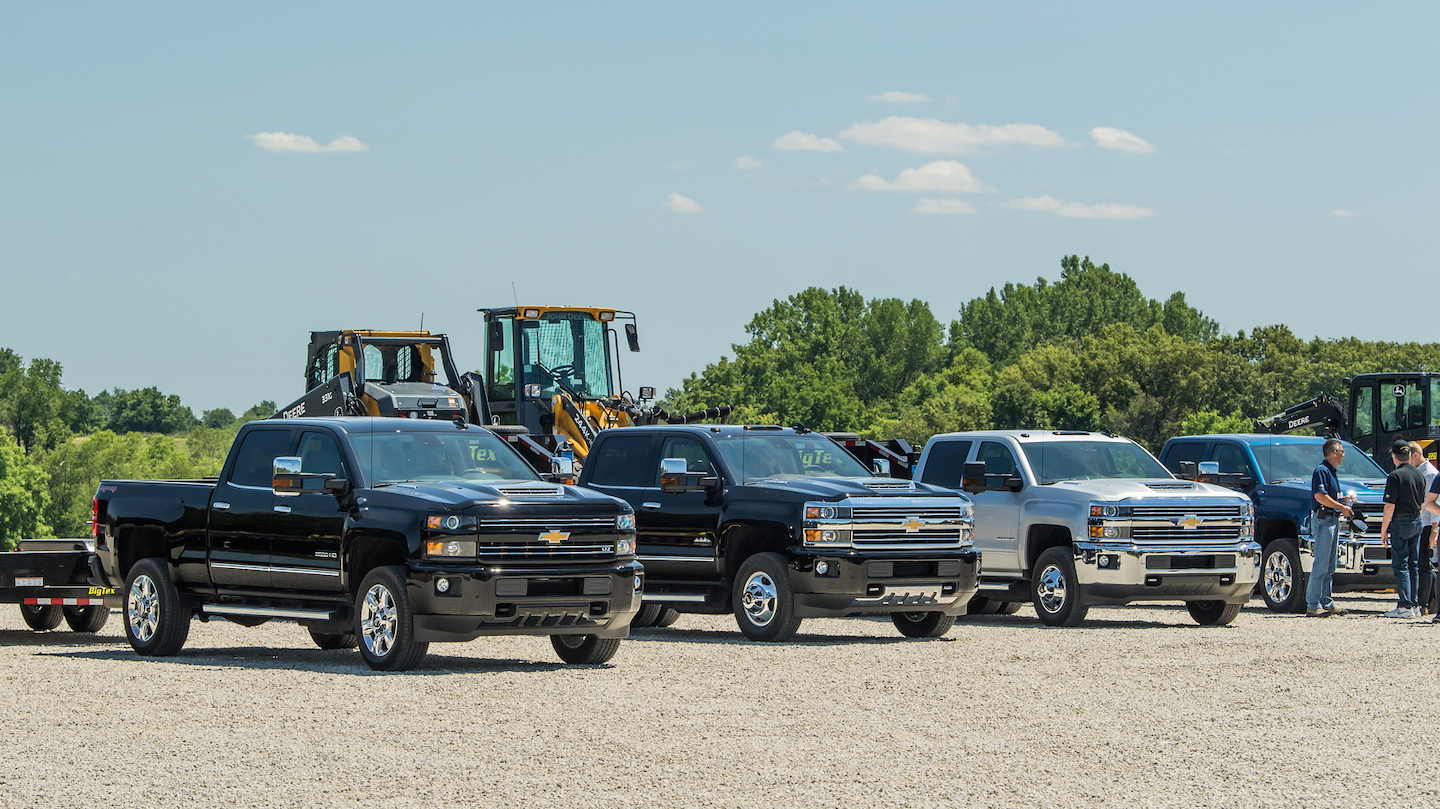 Equipment Today magazine was recently invited to Moline, IL to sample the 2017 Chevrolet 2500 in real-world conditions, pulling John Deere equipment from a John Deere manufacturing plant to the I-80 Truck Stop – the world’s largest truck stop. For 2018 the changes will be mainly cosmetic with new colors and accents. In addition a rear-view camera will be standard on all models with a cargo box.

Upon arrival, we were greeted with a fleet of Chevrolet 2500 and 3500 crew cab pickups paired to Big Tex trailers with John Deere compact equipment already tied down. For the test drive I chose a well-equipped Silverado 4WD LTZ Crew Cab pulling a receiver hitch mounted Big Tex 14ET-18BK-KR convention trailer loaded with a John Deere 316 G skid-steer loader with a side-dump bucket.

Prior to hitting the road, it was time to adjust mirrors, the seat, towing controls, climate control and navigation. I manually extended the trailer tow mirrors for better visibility and was then able to get good visibility to both sides of the trailer as well as visibility to the rear. For trailer controls, I ensured the Tow/Haul was engaged and then selected the engine brake on the center stack.

To my surprise, the seats were not only heated, but ventilated. It was a warm day and circulating cool air through the seats does add a level of comfort that can quickly spoil a person. Being 6 ft. 5 in. tall, I have no problem reaching throttle and brake pedals, so I left the adjustable pedals fully extended forward. Shorter drivers have the ability to move the pedals closer at the touch of a button.

Our driving route was pre-programmed in the truck’s navigation center. Since my navigation wasn’t showing when I turned the truck on, it took me a couple of minutes to find the route in the favorites section of the navigation. Like anything else, the use would become second nature in very short order if you actually used the truck very often.

Time to hit the road 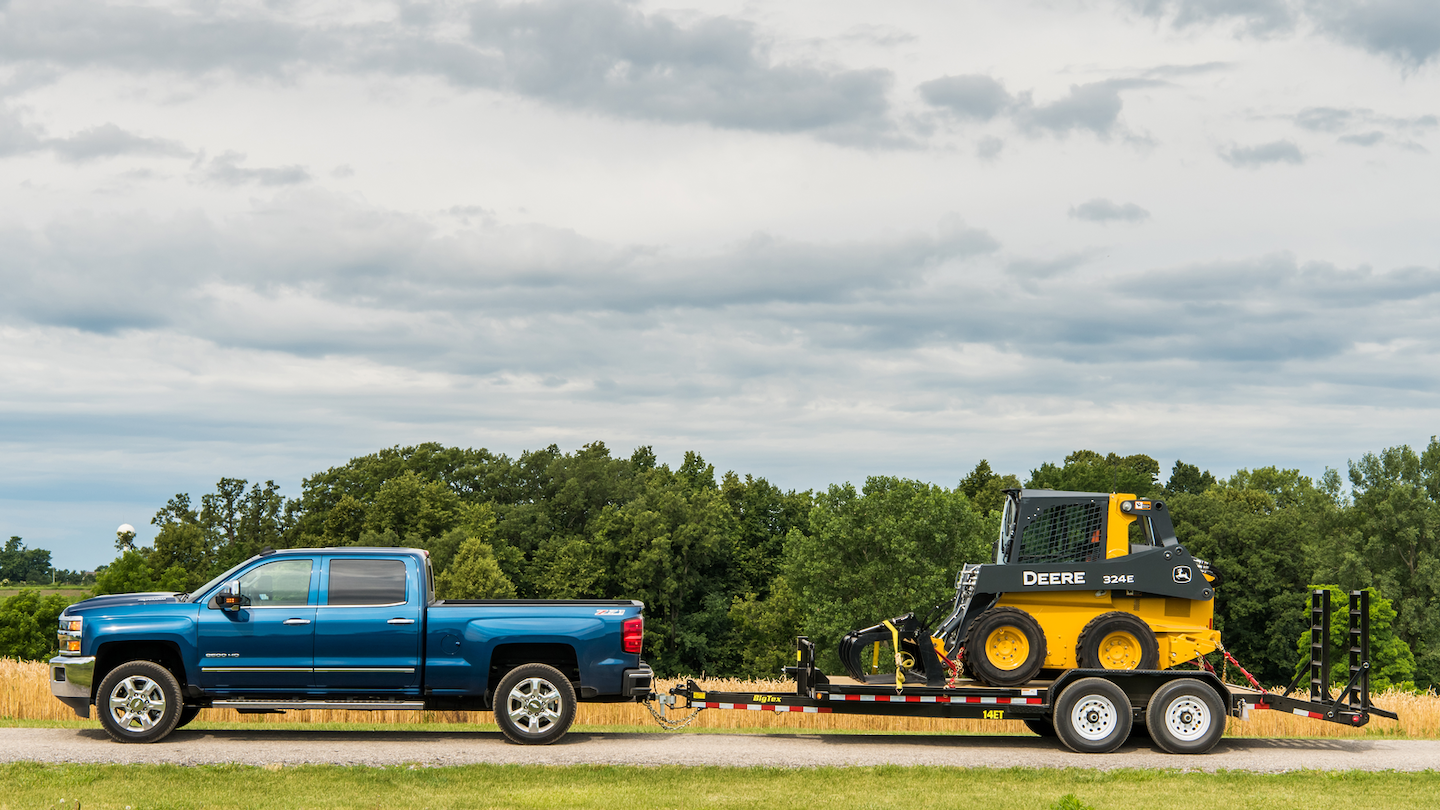 Digital Steering Assist adapts to make it easier to maneuver the truck in low-speed maneuvers yet inspire confidence at higher speeds.The truck was equipped with a 6.6-liter Duramax turbo-diesel engine that puts out 445 hp at 2,800 rpm and 910 lb.-ft. of torque at 1,600 rpm. This was more than adequate to accelerate the load up to highway speed at a reasonable pace and hold the posted 70 mph speed limit with little effort. Like most modern diesel engines, the first thing you notice is what is missing – the noise. There was no diesel clatter and you could carry out a conversation in a normal tone. As a matter of fact, if you were not the one driving and didn’t have the benefit of the response from the throttle pedal, you might not even realize you were in a diesel pickup.

When towing, it is often the small things that can make a big difference. There is no subjective way to measure the effects of electronic stability control or trailer sway control. The fact that the load easily goes where you guide it with minimal effort and confidence inspiring stability might be an indicator that the systems are at work. It is these electronics working behind the scenes that can ease life for the driver.

One such feature is the Digital Steering Assist. It adapts to make it easier to maneuver the truck in low-speed maneuvers yet inspire confidence at higher speeds. And on crowned roads, the system will recognize when you are applying pressure to the steering wheel and adapt. The result is the driver no longer has to constantly fight the steering wheel while traveling down the road for long stretches. To test this theory, I briefly took my hands off the steering wheel a couple of times while at cruising speed. Sure enough, the truck tracked straight ahead and didn’t have a tendency to pull toward the ditch.

When it was time to pull of the entrance ramp I had a chance to try the engine braking. It really slowed the truck without needing to use the service brakes, and if I was patient enough it probably would have eventually brought the truck to a stop. This technology should save on excessive brake wear for customers who trailer on a regular basis.

The big take-way was this truck handled more like a 1/2-ton pickup and really simplified the task of towing compact equipment. Getting your equipment from Point A to Point B with the least amount of effort is really the goal, doing it in comfort is a definite plus.