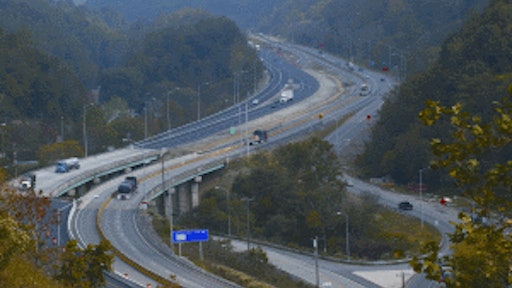 When it comes to winning the nation's top award for asphalt paving, it's better to be good than lucky, because luck alone won't cut it. To win multiple Sheldon G. Hayes Awards for excellence in building asphalt pavements, it helps to have a culture of quality throughout your company. Since the National Asphalt Pavement Association (NAPA) began giving the award in 1971, four construction companies have won the Hayes Award multiple times. They are:

"It's like having a good football team; you get to go back to the playoffs," says Jim Gauger, president of Oldcastle Materials Group, Midwest Region, the parent firm of Des Moines Asphalt & Paving.

"We've built a culture that everyone in our company buys into," says Vince Tutino, president of Lindy Paving. "And that culture is quality in asphalt pavements. The whole company is continually working to improve what they do toward the goal of quality and excellent riding pavements.

The Sheldon G. Hayes Award winner is determined through a two-year, three-step process. Projects must use more than 50,000 tons of asphalt, and initially they must win a Quality in Construction Award. Those winners are determined by numerical scores given by pavement engineers at the National Center for Asphalt Technology on the basis of how well the contractor met the specifications and achieved density. All the pavements that meet a benchmark figure are given a Quality in Construction Award.

The year after a project wins a QIC Award, it may be considered for the Sheldon G. Hayes Award. The top-ranked projects from each year are tested for smoothness, then visually inspected by an independent pavement consultant with many years of experience in the industry.

Lindy Paving's Hayes Award this year was given for Section 35M, a 6.6-mile stretch of Interstate 79 north of Pittsburgh. The worn concrete roadway was designed to be cracked and seated. Antigo Construction used a guillotine hammer to crack the concrete at 24-inch intervals. Then the concrete base was seated with a 40-ton tow-behind, rubber-tired roller.

"We hit 27.5 inches per mile on the northbound side, and 29.2 inches on the southbound side," said Joe Conti, quality control manager for Lindy Paving. In fact, Lindy won approximately 91% of the maximum possible bonus for Section 35M.

Dan Ganoe, Lindy's operations manager, said it's important to maintain a consistent paver speed through a shift. For Section 35M, the contractor could pave from bridge to bridge within one shift, so no transverse joints were necessary. Distances per shift ranged from 1 to 5 miles.

Bridge spacings were such that Lindy could set the paver speed at the rate necessary to finish a stretch between bridges in one shift. "We paved at different speeds for different shifts," said Conti. "It could be 45 feet per minute or 70 feet per minute. No one number is the best."

Lindy used a Roadtec SB 2500 Shuttle Buggy to remix the asphalt on the job and transfer it from trucks to the paver. "The Shuttle Buggy is an absolute necessity," says Tutino. "It provides for continuous paving, it prevents trucks from bumping the paver, and it remixes the asphalt to prevent segregation. Plus it affords faster delivery to the paver."

Tutino said Lindy was one of the first, if not the first, contractor in Pennsylvania to use a material transfer vehicle in asphalt paving. "We had a Barber Greene remixer, then Roadtec came out with the Shuttle Buggy," Tutino recalls. "Back in the early 90s we were one of the first contractors to use a Shuttle Buggy, even though it cost us more. Then within two or three years, Pennsylvania began to effectively specify a Shuttle Buggy, because they write the spec for segregation in a way that leads you to use one."

Before each shift, Lindy held meetings of the crew to discuss safety, production rates, roller techniques, and the general layout of the work for the shift. The length of pavement per shift determined the speed of the paver, and then plant production matched paver speed.

Start times for the trucks were staggered to spread them out and still meet production goals. Production rates changed daily, but generally ran in the area of 250 to 350 tons per hour.

Conti said Lindy ran a profiler behind the paving crew to monitor the ride of the freshly compacted asphalt. "We maintained constant communications among three people - the ride technician who runs the profiler, the nuclear density gauge operator, and the paving foreman," says Conti. "That way if some sort of adjustment needed to be made, we could make it in a timely fashion.

Conti says Lindy uses two 42-foot-long "over the screed" skis – in contact with the pavement – as mobile reference units to help control paving depth. The front part of the ski rides on the existing surface of pavement, and the rear portion of the ski rides on the newly-placed asphalt. "We have found that the contact method with over-the-screed skis gives us the best ride," says Conti.

Winners in the heartland

Des Moines Asphalt & Paving's most recent Hayes Award went for a three-mile stretch of Interstate 235 in Des Moines, IA. The contractor added a lane and a shoulder of full-depth asphalt to I-235, and paved three 2-inch lifts of asphalt on the adjacent two lanes of existing concrete. Then the entire width was paved with a 2-inch wearing surface running in both directions.

Base and intermediate course paving had to be coordinated with construction of a drainage sewer and median barrier in the center of the divided highway. That made placement of the intermediate courses more difficult, said Gene Baloun, paving superintendent.

A Six-Pack Astec asphalt plant supplied mix to the paver, which ran along at about 35 to 40 feet per minute; the plant could crank out 300 to 350 tons per hour. The contractor used a Roadtec SB 2500C material transfer vehicle for the intermediate and surface courses.

"We ran 13 trucks for the beginning and ending of every shift, during rush hour times for traffic," said Baloun. "It was about 10 miles from the plant to the site, and it took a little less than an hour for the trucks to make the round trip. Then in the middle of the day, we could back off to 11 trucks.

Crews held meetings every morning to discuss the lanes to be placed that day, the depth of the pavement, production rates, safety and so forth. "I was constantly measuring the rate of the paver," said Baloun. "We ran at about 2,200 feet per hour and sometimes a bit more, but not much."

A quality control person with Des Moines Asphalt constantly monitored densities with a non-nuclear gauge. The roller operators were experienced on major projects and knew the patterns they needed to use, Baloun said. Two break-down rollers ran behind the paver, and each roller would make three passes per pattern.

The breakdown rollers were followed by a pneumatic roller making five passes. Finally, a double-drum roller running in static mode finished compaction. "We tested for density behind all three rollers - breakdown, pneumatic and finish rolling," says Baloun. "If we weren't getting density, we could have the breakdown rollers make five passes instead of three. But that could be a double-edged sword, because if you roll it too much, you can actually create bumps in the pavement and smoothness would suffer."

Did the company try to win the Hayes Award on that section of pavement? "We're trying to win an award on every section we do," said Baloun. "But it doesn't always happen that way."

How did the company win the Hayes Award twice? "We have really good people who care about the quality of their work," says Liz Baloun, Gene's sister and project manager for the I-235 project. "The company gives us good equipment, and we have people who care about doing a good job. And we have great managers, Jim Gauger and Greg Kinser, who allow us to do our jobs well, so that we get a great product in the end."