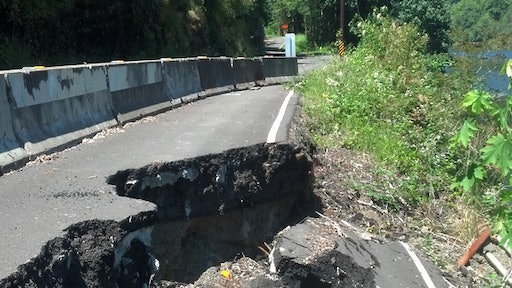 Sweet Creek Road was built in 1896 and has since fallen victim to heavy rainstorms and washouts, the erosion of soil or grave due to heavy floods or downpours. These washouts have disabled use of Sweet Creek Road to the 650 vehicles that use it daily, according to David Brown, Construction Service Manager for the Lane County Public Works Department.

West Coast Contractors (WCC) is one of three recipients of the several 2013 American Public Works Association (APWA) “Small Cities/Rural Communities (SC/RC) Project of the Year Award.” The Coos Bay construction company was  honored by the APWA along with the engineering firm OBEC and the Lane County Public Works department.

WCC received the award from the Oregon Chapter of the APWA for their work on the Sweet Creek Road project in Lane County, Oregon. The project expanded a transportation link between State Highway 126 and 30,000 acres of National Forest Land. The road is also a vital route to timber resources that provide 5 million board feet of timber annually.

The SC/RC Project of the Year Award recognizes managers, consultants and contractors for their excellence in management and administration of public works projects. WCC will add this award to their already impressive list of honors, which includes the “Protect the Northwest” award from the National Oceanic and Atmospheric Administration (NOAA), and the SIR (Skill, Integrity, and Responsibility) award from the Associated General Contractors of America. These awards demonstrate WCC’s genuine devotion to their clients and the projects they work on.

The APWA is a non-profit organization representing nearly 30,000 public works professionals. The Oregon Chapter of APWA alone consists of over 800 engineers, technicians, contractors, and consultants who come together to exchange ideas, facilitate education in the industry, and build a network of public works professionals. The APWA established its award program to recognize individuals and companies in the public works industry that produce outstanding results for their clients and communities.

West Coast Contractors was honored with the SC/RC Project of the Year Award after they completed their rehabilitation of the retaining wall and bridge on Sweet Creek Road. The road was first built in 1896 and was suffering from erosion and rainfall damage. The retaining wall, which  was nearly half a century old was also long overdue for reconstruction. The project took WCC less than a year to complete; eight months ahead of schedule. The road is now open for two-lane traffic for the first time in three years.

In this episode, Jess & Dormie talk to Vijay Palanisamy, director of product marketing & communications at Dynapac North America about how they are working to make their machines safer for operators. Watch to learn more.
Jessica Lombardo
May 14, 2021

Asphalt Materials Inc. has created a culture of safety at their company to achieve their goal of getting every worker get home to their families each night.
Jessica Lombardo
April 26, 2021
Follow Us