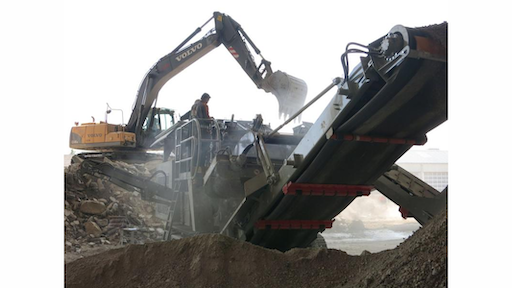 In mobile machines used in the construction industry, the investment in hybrid technology can be justified just with reduced fuel costs, rather than in abstract green values known from the automotive industry. This is especially true with the new hybrid stone crusher from Austrian manufacturer Rockster with serial-hybrid drivetrain from Finnish hybridization specialist VISEDO.

The innovative design is a true hybrid based on a supercapacitor energy buffer. The crusher uses the stored energy from the buffer for the load peaks coming from the operation. The energy storage technology would allow smaller diesel engine than the standard 242kW, but as the goal was along the fuel saving to improve productivity, the diesel engine remained the same.

The first Rockster R1100DE hybrid crusher was delivered to France for recycling work. The first months of operation showed the results as the machine could reach a fuel saving of 30% (11l/h) and improved the crusher output by an amazing 43% (100t/h) at the same time. Together these figures lead to a payback time of under 1 year.

The Rockster hybrid crusher shows also the basis of hybridization in mobile machinery which is the cyclic loads of the machine and not only the regenerative braking associated typically with hybridization. The focus of the design was the main energy user which is the main crusher drive used in very high power, but as can be seen from typical use, the high power is needed during only short peaks and the average power is substantially lower. The fundamental idea of VISEDO serial-hybrid system is to use the diesel-engine intelligently as variable speed gen-set where only the average energy is produced by diesel and the extremely fast PowerCAP™ buffer handles all high demand peaks.

The use of electric motors is not new in crushers, but as a true hybrid the R1100DE is unique. The idea in the traditional diesel-electric solutions is just to reduce the fuel consumption with the high efficiency electric system. The standard electric components available are also fairly large and need efforts when used in such harsh conditions. The VISEDO system is from the beginning designed for these rough conditions with dust, moisture and mechanical vibrations.

As each component in the system is designed to work together seamlessly with operation optimized for extremely high efficiency of ~90% in total throughout the load cycle, the integration becomes very easy. Unlike with standard components, there is no need for additional enclosures or extra space. PowerDRUM e-machines based on VISEDO SRPM-technology produce several hundred kilowatts from a size that fits in persons lap and PowerMASTER inverters deliver 250 kW from an IP67 enclosure fitting in a shoe-box. The complete drive train built from optimized parts can survive in these rough conditions easily 15 years.